Since the release of Coin-Flip Capitalism in May, the public debate over the value of private equity and other so-called “alternative assets” has intensified, while the struggle of private funds to beat the market during a historic downturn has only reinforced concern about their long-term viability.

Writing in The Wall Street Journal, University of Chicago professors Todd Henderson and Steven Kaplan challenged the “Coin-Flip Capitalism” project and asserted the “enormous social value” created by private equity—namely fees and carried interest to fund managers. Rather than identify the social or economic side-effects of corporate raids, Henderson and Kaplan insist that “what matters for society is how much wealth [funds] create above the next-best alternative.” Of course, that wealth is not broadly shared, in fact – as the authors note – it comes at the expense of workers, who see lower employment growth and compensation. Oren Cass responded to Henderson and Kaplan at The Commons, deconstructing the professors’ “impressionist masterpiece of market fundamentalism.”

As The Wall Street Journal asserted the social value of private equity’s free structure, new research corroborated the Returns Counter’s principal finding about private equity: buyout funds have struggled to outperform public markets in recent years. In a new working paper, “An Inconvenient Fact: Private Equity Returns & The Billionaire Factory,” Ludovic Phalippou of the University of Oxford’s Saïd School of Business finds that private equity’s net returns have mirrored those of public market indices from 2006 to 2019. Such mediocre performance, Phalippou argues, has been the norm not only for the industry’s “Big Four” firms – Apollo, Blackstone, Carlyle, and KKR – but also for its largest investors, namely public pension funds.

Of course, the underperformance of private equity is no mere academic concern. As Sam Long observed in a recent post at The Commons, America’s pensioners have seen their money invested in private-equity strategies that can undermine their own livelihoods—all for mediocre returns. Millions more Americans now face a similar predicament. In June, the Trump administration took steps to make private equity funds available to individual 401(k) investment plans, opening a potential $6.2 trillion of capital to buyout firms. Private equity returns will soon implicate not only institutional investors of public concern, such as pension funds and non-profit endowments, but the financial futures of American without access to the resources and expertise to properly assess the risk-reward tradeoff of “alternative assets.”

For hedge funds, the picture is much darker. Bloomberg reports that the most popular hedge-fund investment strategy, “long-short,” is facing an “existential crisis” as landmark funds, such as Lansdowne Partners and Sloane Robinson, shutdown their long-short funds. Recent market research shows that long-short funds’ returns represent all of the downside of traditional equities, but only a quarter of the upside. Indeed, recent market volatility has only repeated a now-familiar pattern for hedge funds: failure to protect against downturns or take advantage of recoveries. If long-short strategies cannot survive a major economic downturn—just the sort of event they were designed to weather—it raises questions for a broader industry that, as the Returns Counter highlights, has struggled for the last decade.

Paulson & Co., the high-flying hedge fund renowned for the “greatest trade ever” and highlighted by Coin-Flip Capitalism as an underperformer ever since, officially closed in July. Through a combination of investment losses and client withdrawals, the fund’s assets collapsed from a peak of $38 billion to just $9 billion in just eight years. Paulson & Co. is just the latest in a string of high-profile funds to close in recent years.

With Q3 2020 underway and Q3 2019 returns data now available, the Returns Counter can be updated to show another quarter’s results. The third quarter of 2019 saw the U.S. market slow considerably, with gains lower across the S&P 500 and all three alternative asset classes: hedge funds lower by 2 percentage points, buyout funds by 1 percentage point, and venture capital by nearly 5 percentage points. Looking at the most recent ten-year period, private equity shows a small outperformance versus the S&P 500 while venture capital shows a small underperformance. Hedge funds continue to trail both the S&P 500 and a balanced portfolio by catastrophic margins. 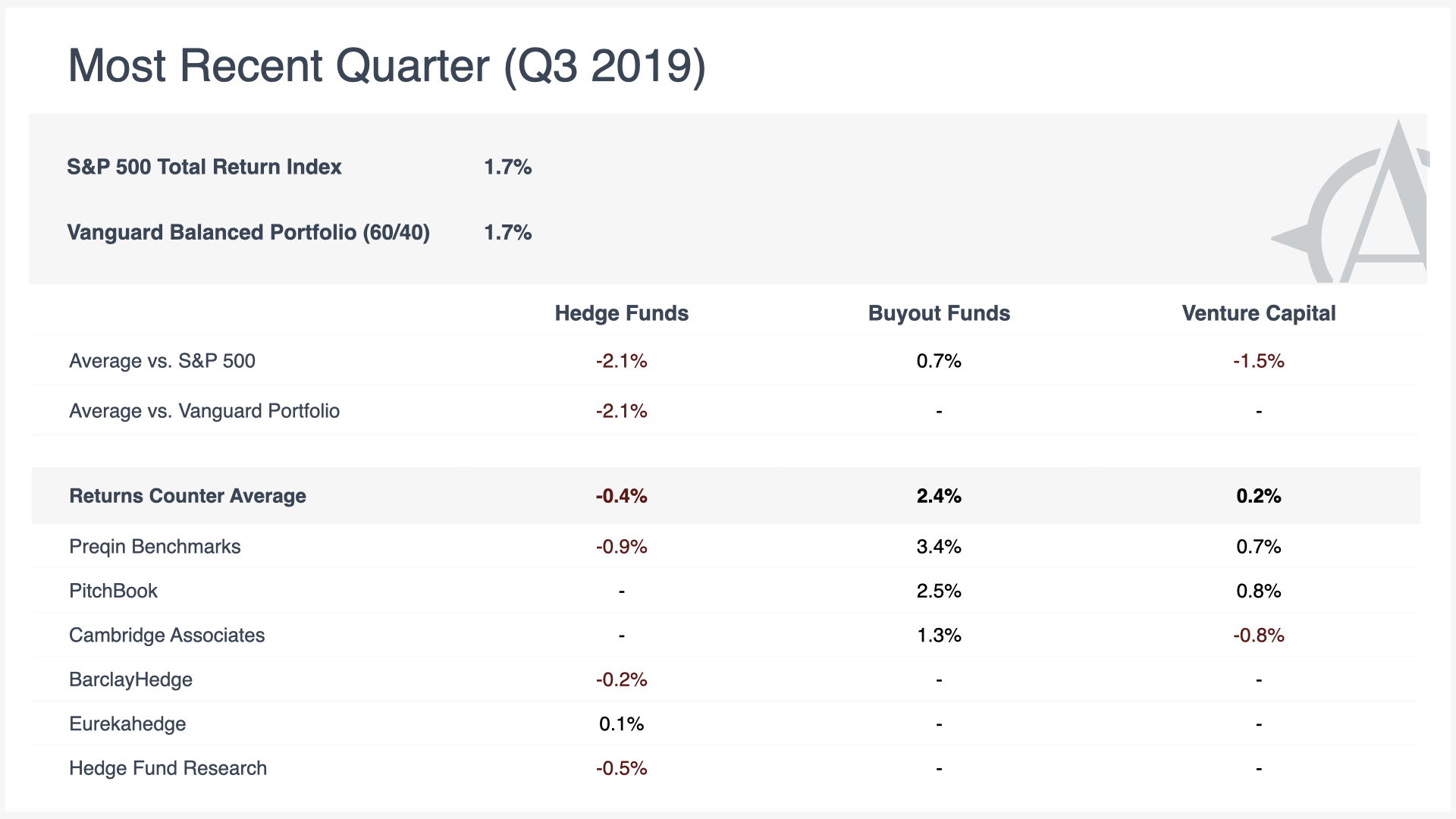 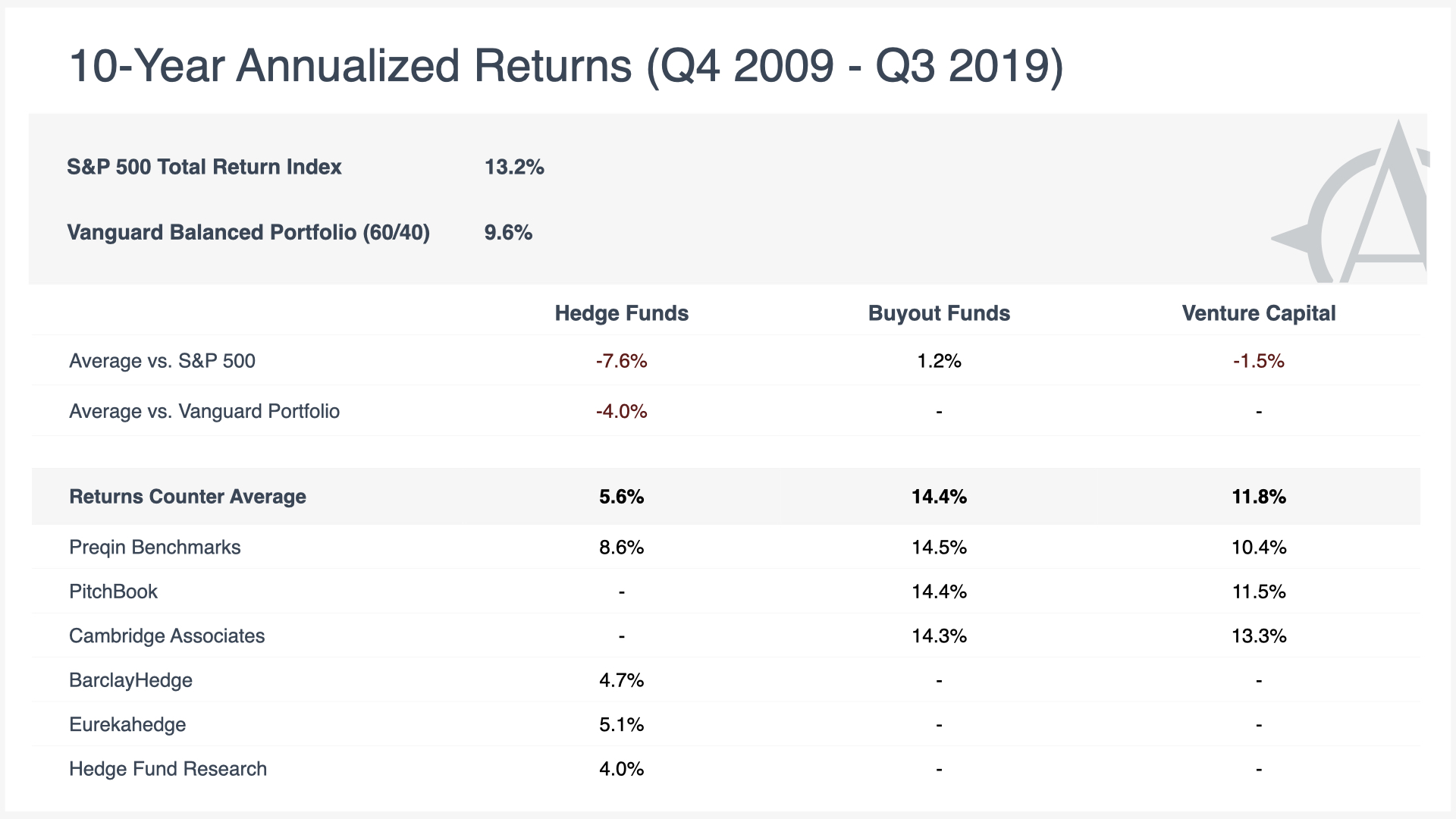 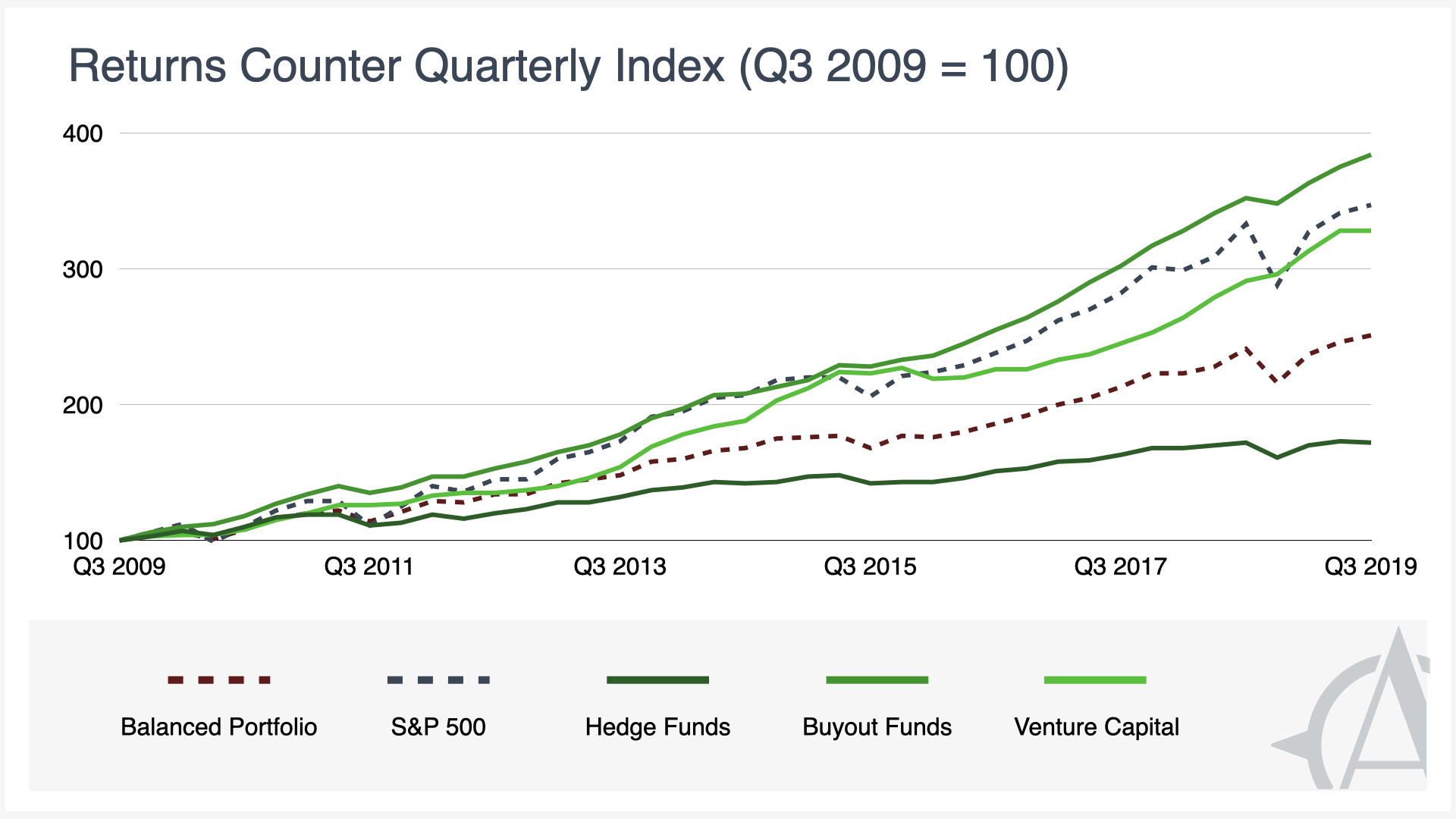