A review of the latest developments in private finance and the latest update to the Returns Counter.

Markets have mostly returned to pre-COVID highs, but the fallout from sky-high volatility in the first half of 2020 continues and funds are under renewed scrutiny for their lack of transparency.

Hedge funds experienced a catastrophic first quarter that saw the steepest capital withdrawals in more than a decade, and they have struggled to win back investors even as the market recovered. Famed fund manager Ray Dalio’s Bridgewater Associates continues to struggle amid its worst performance in over a decade. Its flagship fund is down by 18.6% this year, and investors have withdrawn more than $3.5 billion. But nearly half of hedge fund investors reportedly plan to increase their hedge fund allocations over the next year. Souring attitudes on other alternative assets, including private equity, have investors reconsidering whether hedge funds are their best prospective investment.

A proposed SEC rule change would shield many funds from public scrutiny, requiring only investors with more than $3.5 billion in assets to disclose their public equity holdings quarterly. The biggest investors—some 550 of them—would still report their public stakes, but smaller funds, including activist funds, could operate undetected, adding another layer of secrecy to an already shrouded industry.

The SEC moved the other direction on private equity, though, issuing a “risk alert” to investors citing hidden conflicts of interest as well as abuse of fees and expenses, reinforcing calls for greater scrutiny by regulators and vigilance by investors – especially now that private equity assets are available to 401(k) investors. The Economist recently echoed the need for greater transparency in basic industry information and performance metrics, such as total assets under management, vetted returns data, and standardized performance benchmarks.

Low interest rates are presenting private equity firms with a new opportunity to financially engineer returns through “dividend recapitalizations,” in which portfolio companies take on additional debt to fund investor payouts. In September, dividend recapitalizations accounted for 24 percent of the money raised in the U.S. loan market – up from an average of 4 percent in previous years. The rush toward debt-funded payouts offsets a decline in actual buyout activity, with investors finding little else to buy.

Venture capital appears to be weathering the pandemic-induced volatility relatively well, but new research published by Harvard Business School’s Josh Lerner and Ramana Nanda calls into question its effectiveness for financing meaningful innovation. Lerner and Nanda cite the paucity of technologies that qualify for venture funding, the concentration of scale capital among a few investors, and a relaxed focus on corporate governance by investors.

A new trend in the U.S. financial system may also be worth following: “Blank-check” companies, also known as special-purpose acquisition companies or “SPACs,” raise money from investors and then acquire a target company, providing an alternative to the traditional IPO. SPACs have had a record year in 2020, raising $41.2 billion so far and luring high-profile participants, including renowned fund manager Bill Ackman, former Trump NEC Director Gary Cohn, Moneyball protagonist Billy Beane, and former Speaker of the House Paul Ryan. Now SPAC investors have trained their sights on SPACs themselves, seeking to raise $100 million for a fund that speculates in SPACs – call it a SPAC-of-SPACs or SPSPACAC.

With the final quarter of 2020 underway, the Returns Counter now includes Q4 2019 results. The market was up across the board from the previous quarter, with gains higher across the S&P 500, Vanguard Balanced Portfolio, and all three alternative asset classes: hedge funds returned 3.5 percent versus -0.4 percent in Q3; private equity returned 4.3 percent versus 2.4 percent; venture capital returned 5.5 percent versus 0.2 percent. Looking at the most recent 10-year period, buyout funds narrowly outperformed the S&P 500 while venture capital narrowly underperformed. Hedge funds continue to trail both the S&P 500 and a balanced portfolio of bonds and equities. 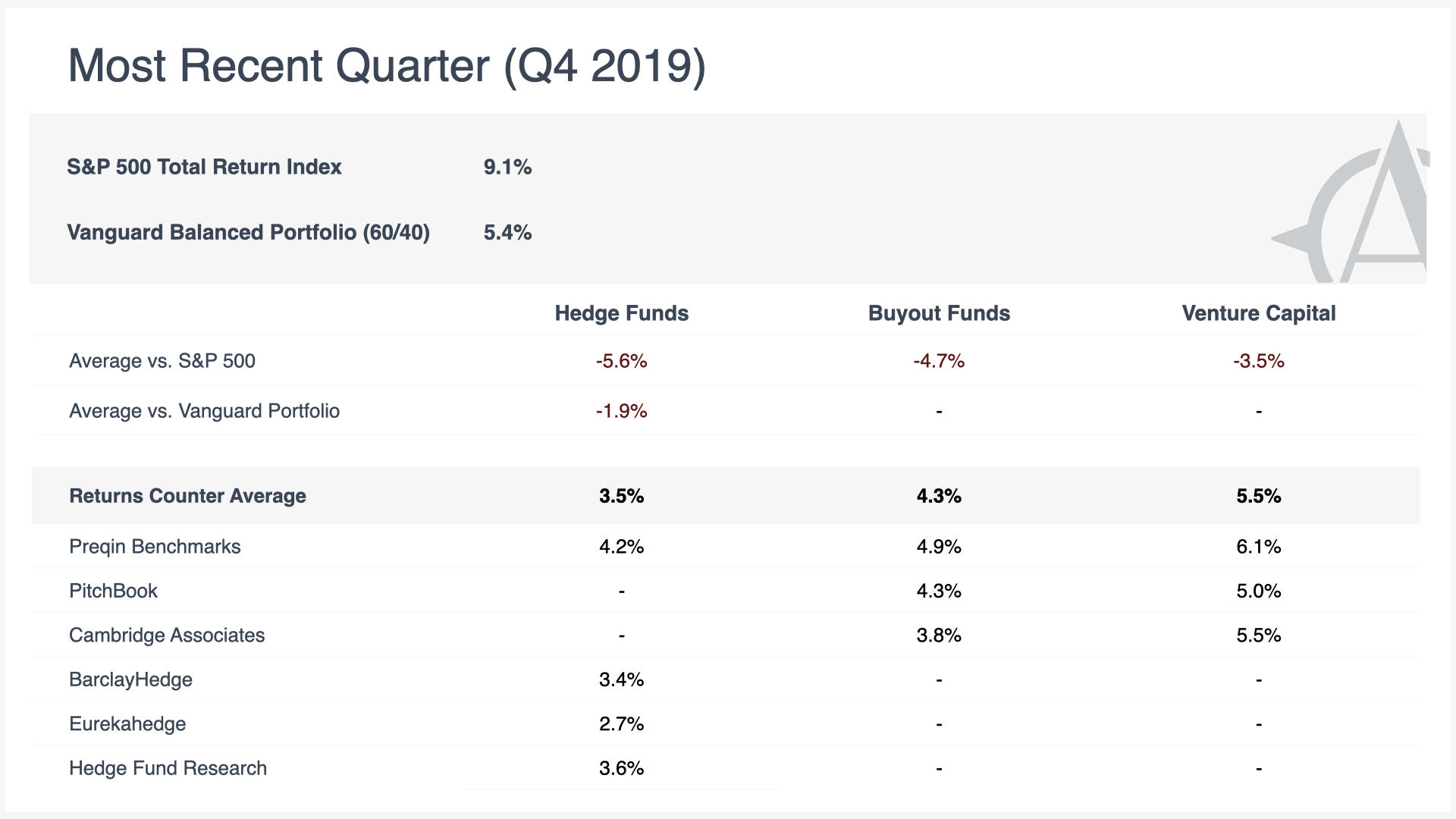 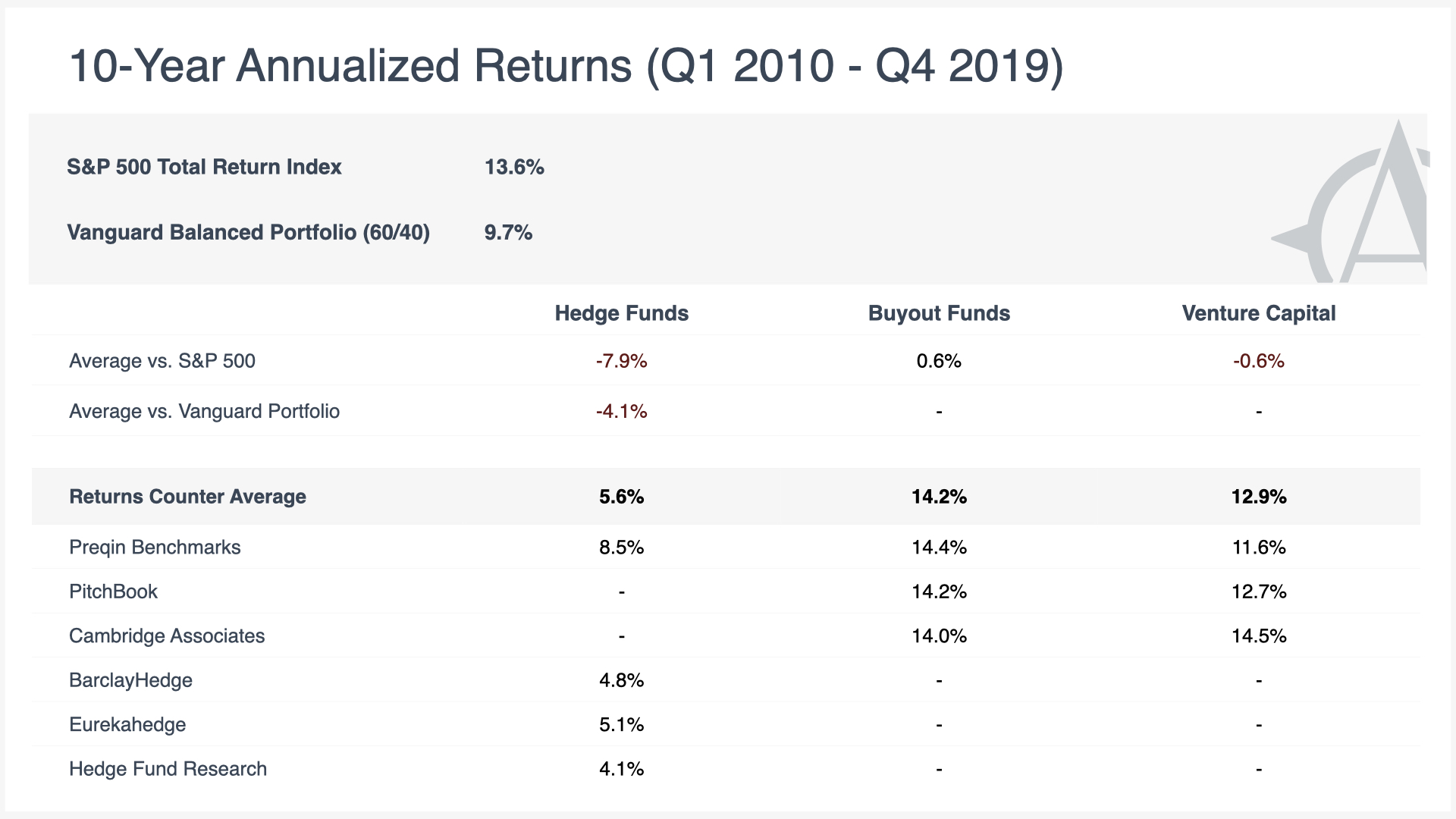 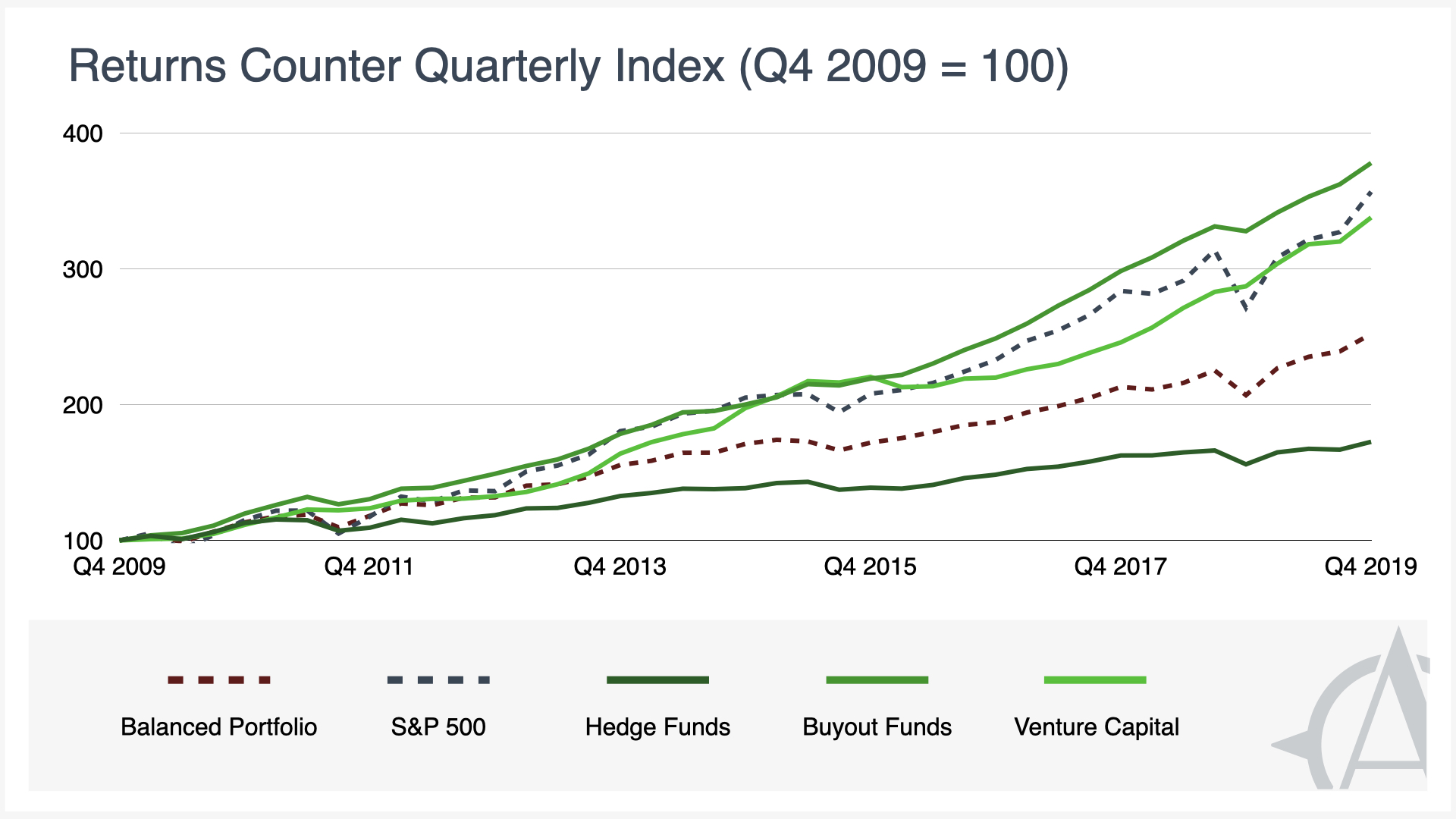 One limitation of the Returns Counter has been that it provides a snapshot of returns from various starting points up to the current quarter, but not for a wider range of end-points. To address this, we’ve added a new chart tracking the trend in long-term performance. It shows the annualized 10-year returns of alternative assets as compared to the S&P 500. 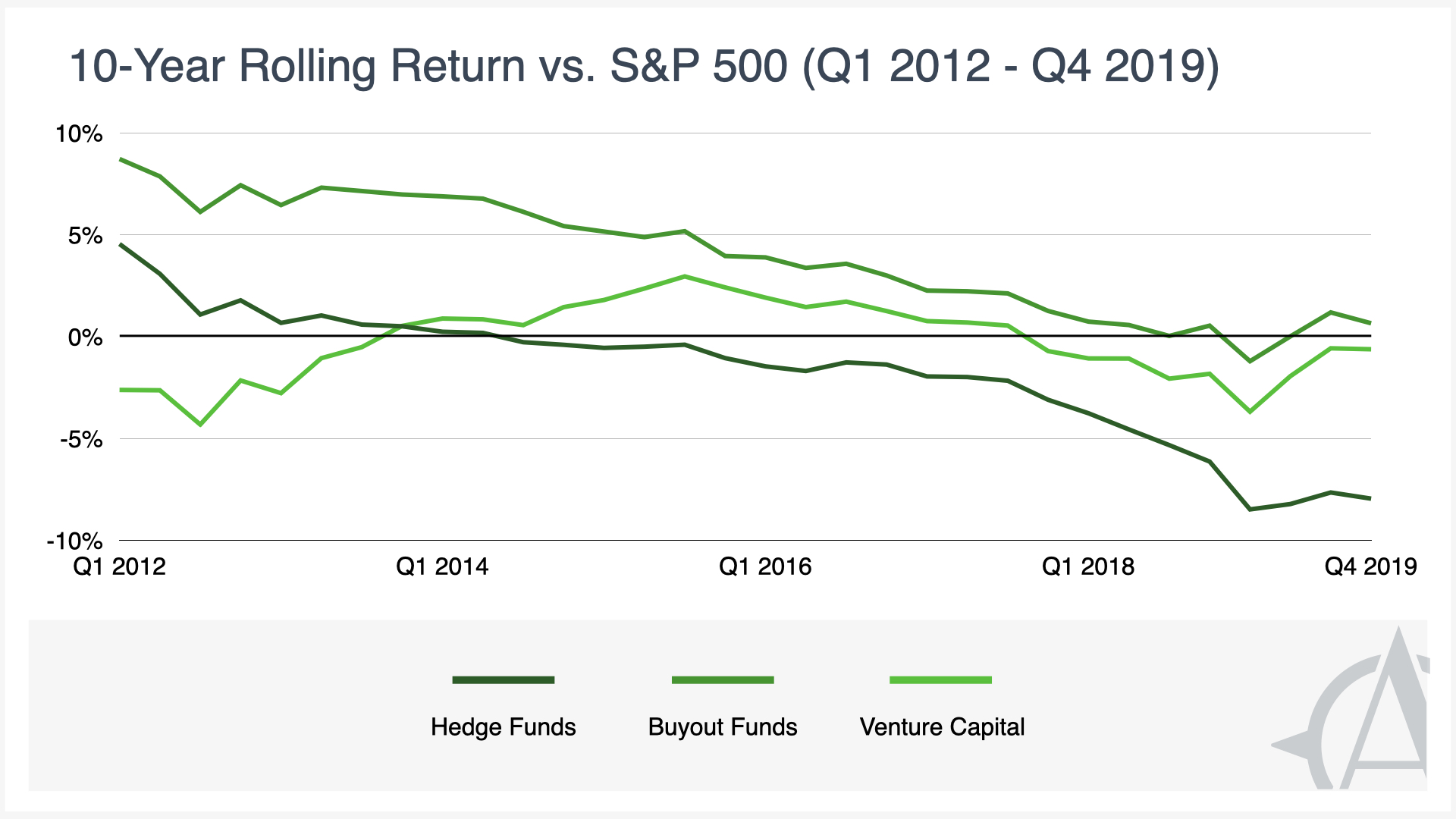 This perspective adds a new dimension to Coin-Flip Capitalism: not only are alternative assets struggling to outperform public markets, but the picture is getting progressively worse. A decade ago, hedge funds’ 10-year annualized returns were well above the S&P 500’s, but they have collapsed over time. By Q4 2019, hedge funds lagged beyond the S&P by 8 percentage points. Buyout funds reflect a similar decline in performance relative to the S&P, falling from a 9 percentage-point overperformance to roughly breakeven over the same period. Venture capital has seen relatively stronger and weaker periods, likewise ending around breakeven at the end of 2019.

These figures will be updated and included in quarterly Returns Counter updates going forward.