The False Promise of Good Jobs

Conventional wisdom holds that globalization has shifted the U.S. labor market’s trajectory, reducing demand for less educated workers while increasing it for college degree holders, such that overall prosperity has risen and improved education holds the key to sharing that prosperity broadly. Employers lament “skills gaps” and their lobbyists argue that more foreign talent must be imported for the economy to remain competitive.

Labor market data discredit this view. While the share of American jobs requiring a college degree has increased in recent decades, the share of workers holding college degrees has risen much faster. Yes, wages rose in those degree-requiring jobs, but for tens of millions of Americans holding such degrees, no such jobs exist. For most of the jobs that do exist, which still require only a high school degree, wages have stagnated.

This analysis of U.S. Bureau of Labor Statistics data finds that:

Pushing more young Americans through the broken college pipeline will do nothing to address these dynamics. Economic reforms must alter the pattern of growth in labor market demand.

Economic analysis and political commentary often emphasize job quantity. Policymakers monitor the unemployment rate and try to pursue the fiscal and monetary policy that will achieve “full employment.” They appear to have been fairly successful. From 2000 to 2019, the U.S. labor market added 17 million jobs. Despite the Great Recession, the unemployment rate in most years held below 5.5%.

But job quality is as important as quantity, especially when evaluating the effects of a broad economic transition like globalization. As Harvard University economics professor Greg Mankiw has observed, “Full employment is possible with any pattern of trade. The main issue is not the number of jobs, but which jobs.” Unfortunately, Mankiw goes on to say: “Americans should work in those industries in which we have an advantage compared with other nations, and we should import from abroad those goods that can be produced more cheaply there.” This perspective, so common among economists, misunderstands the nature of comparative advantage and global trade balances. The formula is an excellent one for producing cheap stuff, but nowhere does it suggest that those industries in which America can produce things most cheaply will be those offering good jobs that allow American workers to support their families and communities. Moreover, a pattern of trade that permits large financial imbalances and thus trade deficits may also see American workers depart industries that produce anything other countries might want, landing instead in a low-wage, low-productivity domestic service sector.

Measuring the quality of jobs is harder than just counting them, but without such measurement one can conclude little about a labor market’s trajectory. Basic trends in median wages and income inequality give some indication, but they are akin to taking the labor market’s temperature. They can help detect a problem, but not the underlying condition. MIT economics professor David Autor has done important work studying polarization within the labor market, and metrics like the Coalition for a Prosperous America’s Job Quality Index (JQI) show the rising share of American workers who are falling behind. But they tend to still leave a question of who is being affected how, and why.

This paper adds to the job quality literature by studying the labor market’s composition across the educational requirements of jobs and the educational attainment of workers. It finds that the “winners” in the modern economy are not so much those workers who obtain a college degree, but rather those who secure a job requiring that degree. America is overproducing college graduates at an alarming rate or, put another way, globalization’s promise of requiring and rewarding much higher levels of education has not materialized. Meanwhile, most jobs still require only a high school degree, and their wages have stagnated.

Median wage is of course only one measure of job quality; further analysis would ideally offer a richer view of how job characteristics have evolved over time. But broad indicators are discouraging: A recent survey by American Compass found that only 30% of America’s non-supervisory workers have secure jobs, defined as those paying more than $40,000 per year for more than 30 hours per week, with benefits and predictable earnings and hours. America must find a model of economic growth that begins quickly to increase that share.

I. Data Sources and Methodology

This paper uses 2000 and 2019 Occupational Employment and Wage Statistics data published by the U.S. Bureau of Labor Statistics (BLS), which estimates wages and employment levels for 700 to 800 different occupations each year (excluding the self-employed), available at https://www.bls.gov/oes/tables.htm. Occupations are classified by educational requirements using data from the BLS Employment Projections table 5.4, available at https://www.bls.gov/emp/tables.htm.

For labor force composition by education level, the paper uses data from the BLS Current Population Survey for workers over age 25, so totals differ slightly from those reported for job categories.

The years 2000 and 2019 are chosen as start and end years because both represent the peak of business cycles, with unemployment rates reaching lows of 3.8% and 3.5%, respectively.

This dataset provides in many respects a crude picture of the labor market’s evolution. But the picture is a stark one and, as a first approximation, it improves significantly upon what people simply assume to be true.

The U.S. labor market added 17 million jobs from 2000 to 2019, of which 6 million required a high school degree or less, 1 million required some college, and 10 million required a bachelor’s degree or more. Relative to the pre-existing distribution of jobs, this represented a shift toward jobs requiring higher levels of education; however, HS jobs continue to represent more than 60% of the total. 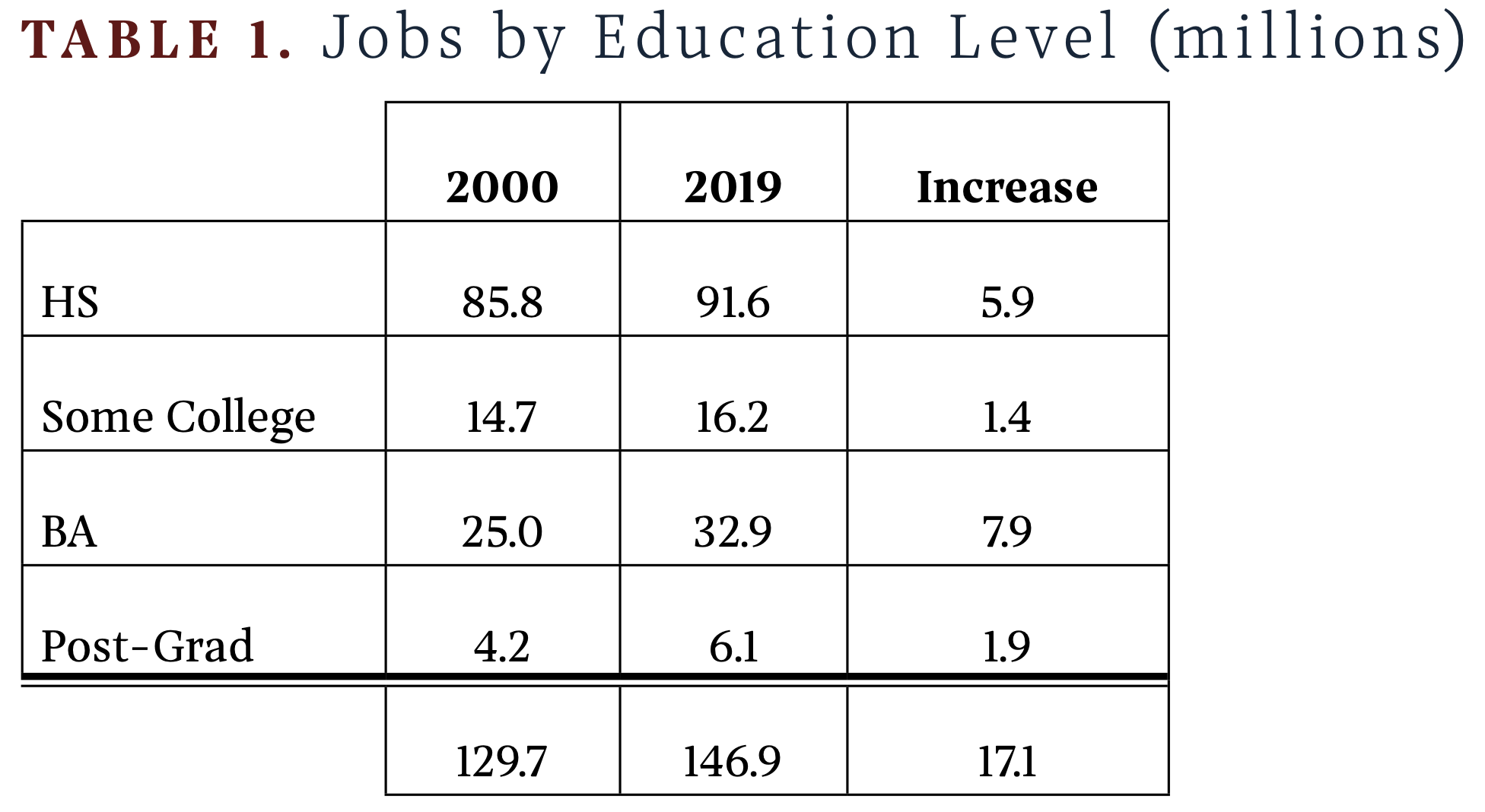 By wage level, net additions to the labor market were disproportionately in higher paying jobs. In absolute terms, the largest gain occurred, and the largest share of jobs remains, in the Medium category with wages between 100% and 200% of the poverty line. 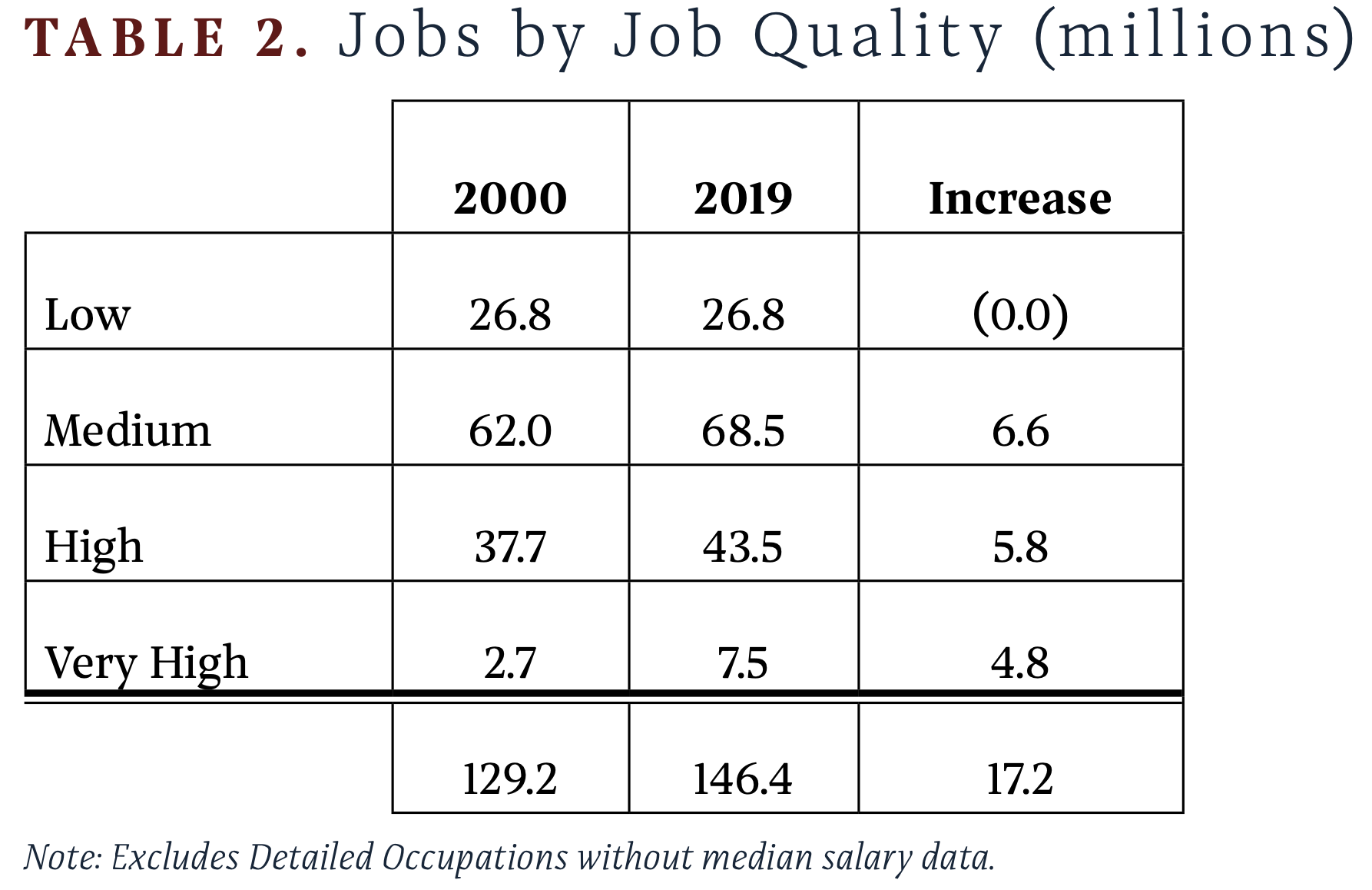 Average (mean) wages increased in occupations across all education levels; however, growth was significantly higher for jobs requiring higher levels of education. 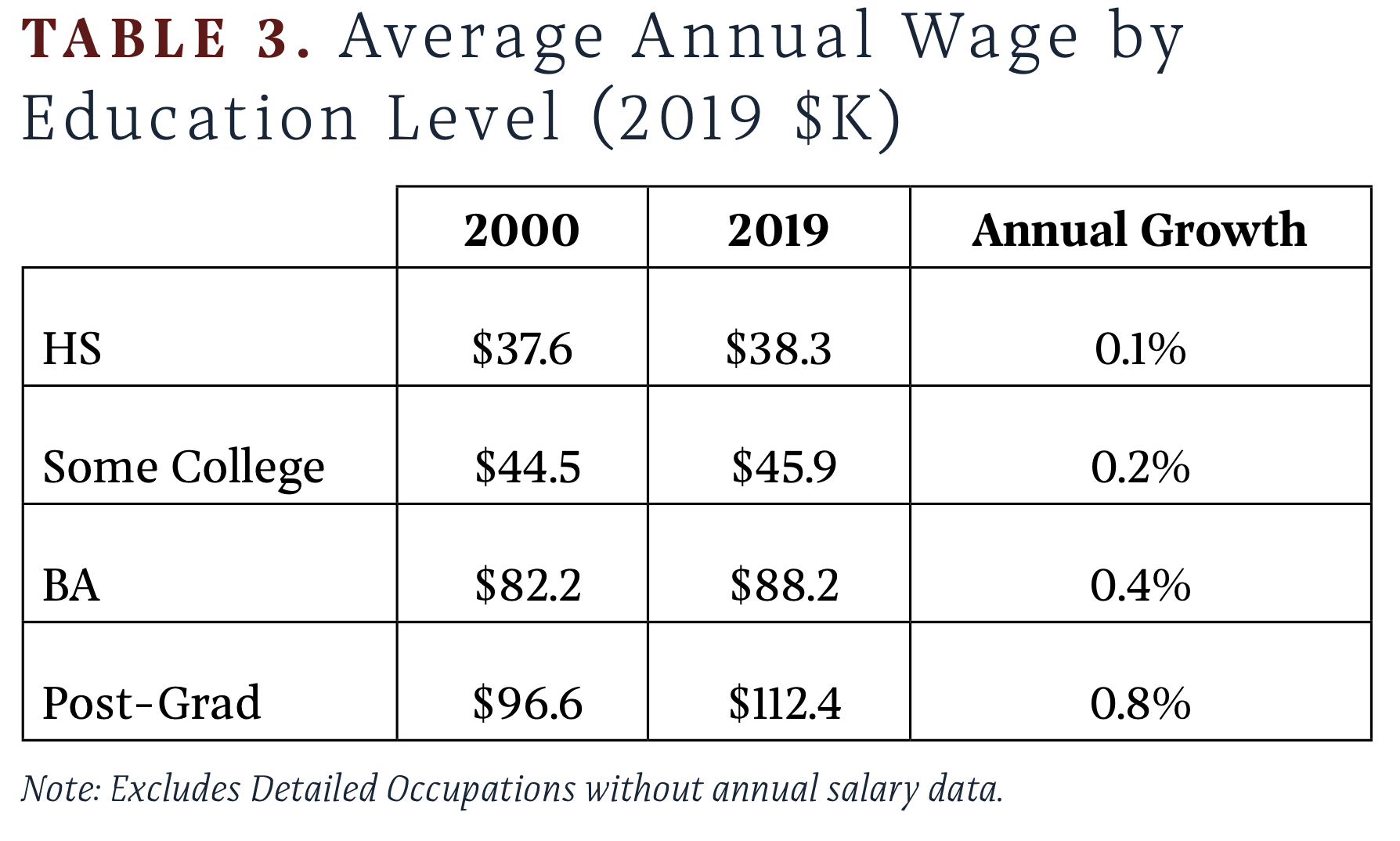 The composition of workers changed in ways different from the composition of jobs. Nearly the entire net increase in labor force participants occurred among BA+ workers, while the number of HS workers declined substantially. 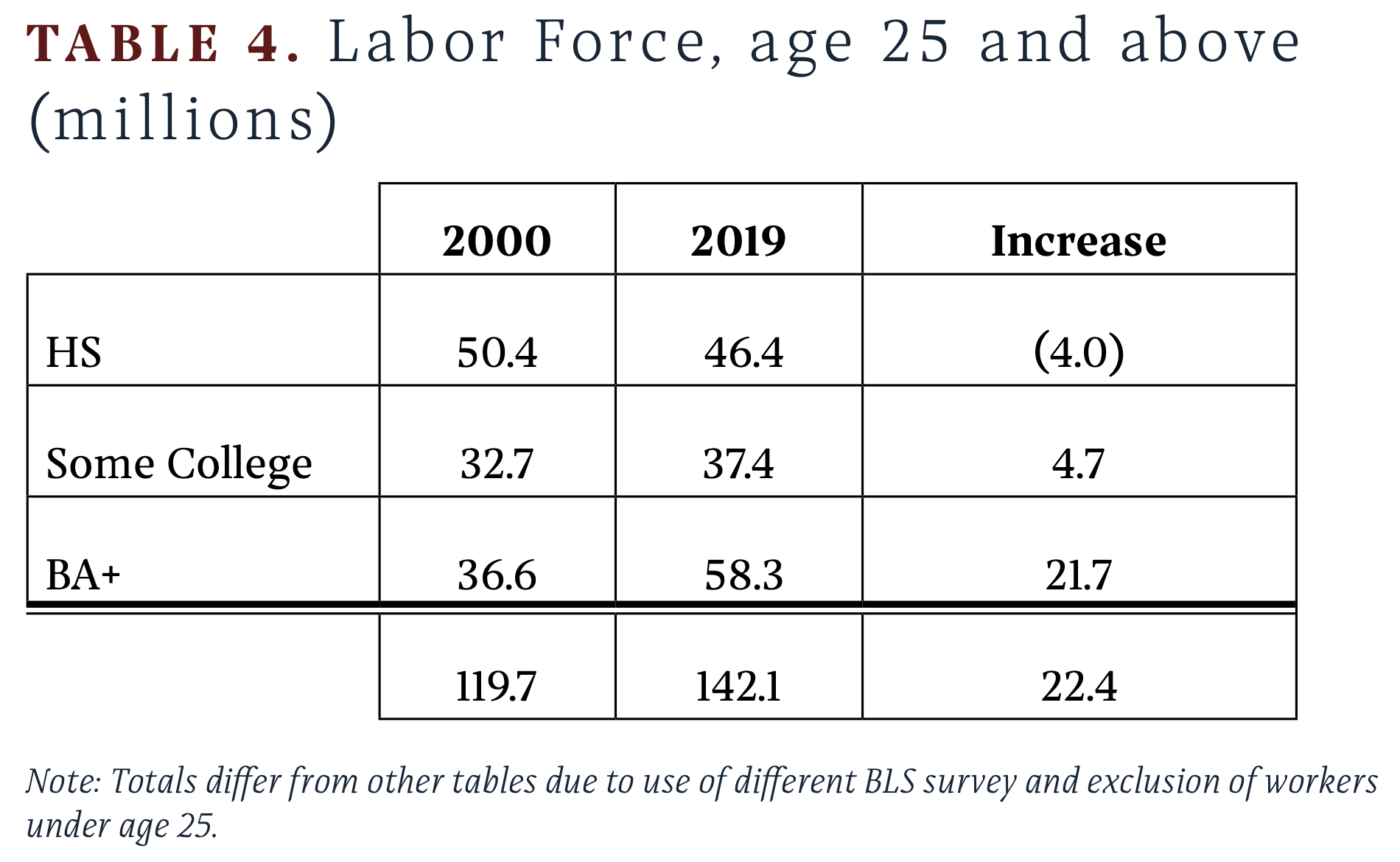 Substantial economic gains have accrued in recent decades to Americans working in jobs that require college degrees. This is not the same, however, as saying that gains have accrued to Americans overall, or even to Americans who hold college degrees. Rather, the labor market’s trajectory has been one that produces benefits primarily for a subset of college graduates who had the highest earnings to begin with. By contrast, America’s economic growth has failed to ensure that gains are broadly shared by the vast majority of Americans with no college degree, or even to expand opportunity for those who do pursue one.

Indeed, while BA+ jobs saw a significant upward shift in their wage levels, with many jobs growing in, and occupations moving into, the Very High category, non-BA jobs saw no such shift and workers in those jobs were nearly as likely to be earning at a given level as two decades earlier. From 2000 to 2019, the share of non-BA jobs paying even 200% of the poverty threshold increased only from 13% to 14%, while 92–93% of BA+ jobs exceeded it.

If earning a BA at least provided reliable access to the higher end of the labor market, policymakers could argue that the solution to this bifurcated market lies in greater investment in education—certainly, that’s the argument they do make. Alongside, the multinational corporations who have most benefited from globalization lament a “skills gap” and insist they are creating the jobs of the future if only Americans were prepared to fill them.

This is, empirically, false.

An Economics 101 analysis of this dynamic would predict that BA+ jobs should have seen relatively weaker wage growth, while HS and Some College jobs saw greater gains. On one hand, the excess supply of BA+ workers should have driven down BA+ wages. On the other hand, the higher human capital of workers in historically non-BA jobs should have boosted their productivity and thus wages. Of course, nothing of the sort has happened.

Instead, the limited set of jobs whose value has risen significantly with the economy’s evolution delivered enormous gains for the one-quarter of workers able to obtain them, while many college degrees pursued and acquired at enormous cost proved to have little or no labor market value.

Policymakers and economists tend to speak about a bifurcation in the economic outcomes for Americans who have and have not received bachelor’s degrees, leading to overwhelming emphasis on helping more Americans earn those degrees. This is not quite right. The bifurcation is better understood as existing between those who obtain the limited set of high-quality jobs requiring higher education and those who do not. And many (especially, in all likelihood, those at the margin) who are earning BAs appear not to be obtaining labor market value from them at all. Thus, the American labor market has two problems: First, that it is not producing the promised increase in high-quality jobs to absorb the nation’s investment in higher education, and second, it is not producing meaningful gains for the majority of Americans who do not and will not earn bachelor’s degrees regardless.

“Supply side” labor market solutions focused on creating more college graduates will solve neither of these problems. Economic reforms that yield a different pattern of growth in labor-market demand will be necessary to realize the promise of broadly shared prosperity.

Richard Oyeniran is a private equity associate at New Mountain Capital. He was previously a research analyst at American Compass.