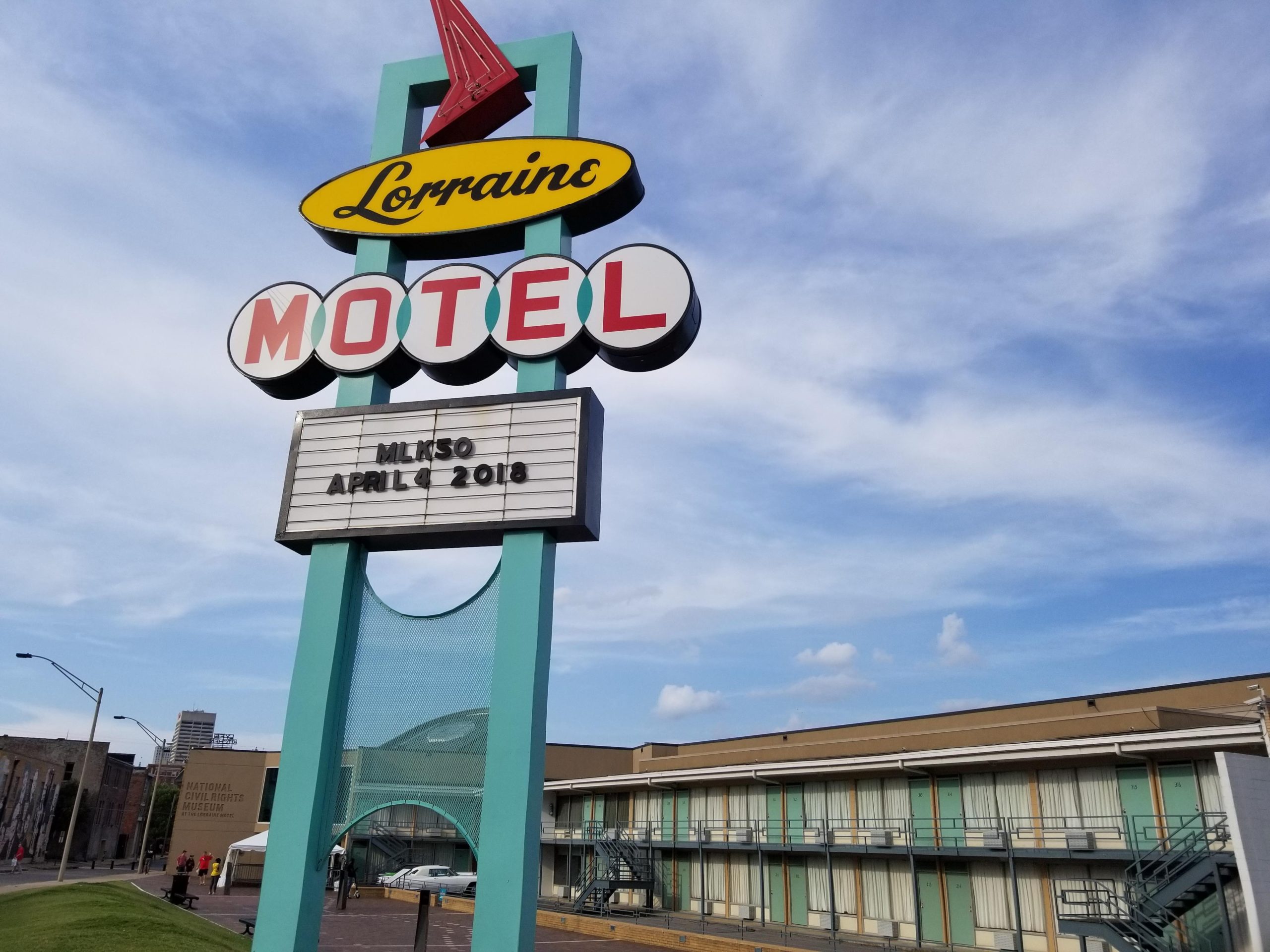 Earlier this month I visited the National Civil Rights Museum in Memphis, located at the Lorraine Motel where Martin Luther King Jr. often stayed and where on April 4, 1968 he was assassinated while standing on the outside balcony, chatting with colleagues and getting ready for dinner. The museum has preserved the façade of the motel, as well as the room in which King stayed. The doors are painted a vintage aqua, a white Cadillac like the one King had borrowed from a funeral home for his trip sits in the parking spot below.

My six-year-old son’s highlight was the massive garbage truck, a replica on display in the exhibit about the 1968 Memphis Sanitation Workers’ strike, the reason King was in Memphis. I was struck by a sign in this exhibit that read:

“Because You’re A BLACK SANITATION WORKER

You have NO SICK DAYS

You have NO BREAKS

You could be FIRED for being 1 minute late

I was glad to learn that the hard-won results of the strike have been long-lasting in terms of wages and benefits for Memphis sanitation workers. But I was mostly struck by how common some of these working conditions still are.

Living in a working class town, I know neighbors who have been fired for calling in sick, or for missing too many days of work because their children were sick. One made the call after having just vomited, but her employer still said she needed to come in. Another called from the hospital after being in a car accident, and was fired from the fast food franchise at which he worked.

Another called from the hospital after being in a car accident, saying he would be unable to go into work, and his supervisor threatened to fire him if he didn’t show up for work. He tried to bring the incident to the attention of the corporate office, but eventually gave up after he was demoted, finding it easier to find a new job than deal with the bureaucracy of the corporation.

I’ve talked with a man in landscaping who is not paid on days when rain interferes, wait staff who are sent home (without pay) during non-busy times, and many service industry employees who say that life was made more difficult by irregular hours and therefore irregular pay.

One newly married man employed at a sandwich shop told me that his employer would only hire part-time staff in order to keep labor costs low and avoid paying benefits. Shortly after the wedding his hours were drastically cut, and his pregnant wife was fired shortly after she informed her employer that she was pregnant. (She later won unemployment when the company could not produce any documentation of the alleged complaints they said were filed against her, complaints of which she knew nothing.) The couple fell behind on bills. They separated a few months after they married, for many reasons but all intensified by acute financial instability.

I’ve also heard stories from people fired for being a few minutes late, particularly temp workers who have few rights or recourse, and are also disproportionately people of color.

Lastly, it’s interesting to note that the sanitation workers who were striking in part for higher wages made $1.65 an hour, which adjusted for inflation is the equivalent of $12.67 today. According to a 2016 Oxfam report, 41.7 million (31.3 percent) of American workers earn under $12 an hour. Furthermore, almost half of all private-sector workers and 80 percent of low-wage workers lack a single paid sick day.

How is it that over the course of half a century of unprecedented economic growth there is so little progress (even regress?) made in terms of wages and working conditions for the American worker?

Stories of unfair treatment at work are a dime a dozen. People recount them without batting an eyelash, tell them more in tones of resignation than indignation.

How can it be that so little has changed for some many?

In his last years of life King increasingly talked about the connections between economic and racial justice and felt a sense of urgency to organize and demand “jobs and income” from Congress. His final months were devoted to developing the Poor People’s Campaign.

As David J. Garrow recounts in his Pulitzer-prize winning biography Bearing the Cross, King told a group in Selma that “we’re dealing in a sense with class issues . . . with the problem of the gulf between the haves and the have-nots.” He preached, “Our economy must become more person-centered than property-centered and profit-centered.” Andrew Young, then executive director of SCLC, elaborated: “The economic crisis and the political crisis are just symptoms of this far deeper moral crisis: an America of racism, materialism and economic exploitation versus an America where decisions are made on the basis of values.”

END_OF_DOCUMENT_TOKEN_TO_BE_REPLACED

As we seek a realignment in American political economy we would do well to rediscover the thought of a 19th-century critic who did not like us very much. John Ruskin (1819–1900) found Americans obsessed with a liberty he considered license and naively committed to an ideal of equality he believed impossible: “also, as a nation, […]

Analysts and commentators talk about today’s “precariate.” The term plays on the Marxist notion of the proletariat, recasting it to describe gig workers, college grads whose income is swallowed by student loan debt, and wage-earners who can’t stay ahead of heath costs, childcare costs, car repair bills, and credit card debt. The term is useful. […]