In the early 90s, as the Soviet Union crumbled, a trickle of Eastern European students came to the US. One of my roles at Johns Hopkins was to greet them at the airport and try to help their transition.

One young man, without asking me, spent his first Sunday in Baltimore walking the length of Broadway. He chose it because he thought it would be “filled with theaters and neon lights.” Instead he found Baltimore’s Broadway, which runs through the center of a poor Black section of town, was filled with poverty, boarded-up buildings, spent bullets, and lots and lots of crime.

When I asked him what he made of it all, his response was something like, “I thought Blacks forced to live in neighborhoods filled with poverty and crime was Soviet propaganda, and like other propaganda, wrong. But they were right.”

While it is easy to ignore how bad crime is in poor neighborhoods relative to wealthier ones, it used to be much much worse. Close to ten times worse.

Starting in the late 60s crime exploded in the US, primarily in poor, minority, and urban neighborhoods.

Criminologists attribute this to a rise in mobility, which led to wealthy and middle class whites moving to the suburbs, and a mix of different populations with different norms and values entering the only places they were allowed to go or could afford: inner cities and poorer neighborhoods.

As businesses, organizations, and upper-income residents fled, a racially/ethnically heterogeneous mix of poor remained. Confined to certain neighborhoods because of racism and poverty, unable to get good jobs as factories and business soon moved, and unable to understand their new neighbors, they became “socially disorganized,” as one community institution after another fell apart.

Everything that held these communities together fell apart. The unions, the local downtown stores, lost out as the elites empowered and unleashed a predatory business environment that crushed anything in the way, including America’s working class. The family and the church fell apart as well, under a one-two punch, first from the economic instability that followed, and then from the shifting social norms that emerged.

Nature abhors a vacuum, and into this one rushed drugs and illegal behavior. Eventually they become a part of the landscape of these communities. A new self-organized structure. At the worst, street gangs replaced the family, the unions, or bowling and basketball leagues.

Crime became so bad, and the call for help from them so loud, that the elites had to respond.

The response wasn’t to rethink the system they had built that wasn’t conducive to local community health, but instead to send in the cops, to try and brutally get the situation under their control.

Eventually, in an attempt to balance this effort, the elites focused some energy and resources, both from the government and by billionaire funded non-profits, on building better and different schools. So a second wave of money, volunteers, and outside institutions came in.

Cops to crack down on kids in the streets, and teachers to keep them off the streets.

The result is the few whites you encounter in these communities are either affiliated with the criminal justice system, or the educational system, as was pointed out many times to me, “You are either a teacher or a cop. That is the only white people we see around here.” 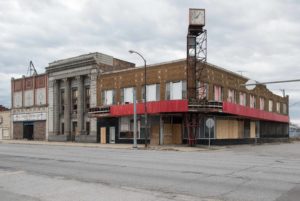 But it is clear from the protest sweeping the country, or if you spend time in poor communities, both efforts have failed, in different ways.

The teachers, despite their great individual work, are the front line of an educational system that intellectually strip mines America, hoovering up the good students, taking them out of their communities.

While almost all teachers and some schools respect local values, our top-down educational meritocracy doesn’t. Rather it assumes the poor need to be monitored via constant testing, with the cream of the crop asked to abandon the place they came from, and shuttled off to study in Princeton or Harvard, or wherever.

Many of them are scooped up and thrown in prisons and jails, often for decades, while the rest are constantly pestered with fines and tickets that keep them running through a maze of dreary institutions: the precinct, court house, legal aid, rehab facility, parole office, etc.

The cops have decreased the crime, but at an awful human and moral cost. The teachers have saved many people, helping them get a golden ticket to a better life.

Yet both systems have failed to build locally run institutions that serves the needs and wants of residents. That was never in the cards. Giving poor and working class communities true power, by respecting their dignity, or agency, isn’t how the wealthy and elites view them. They are a problem to be dealt with.

Removing cops to put in more teachers might lessen the immediate injustices and frustrations, but it will lead to an uptick in crime, which will come at the expense of the remaining local businesses and residents, and ironically make it harder for students to focus on school.

More importantly, it isn’t going to change the deeper problems, because throwing resources at police and education was never about valuing these communities or ceding any real power to them.

To truly value poorer communities, the wealthy, the politically connected, the rich, the elites, (call them what you will), have to view them as places to be respected, not places to be controlled with police, or as pools of talent to be extracted.

That means they will have to give up a little power, change their own values, and put local community health over GDP and profits.