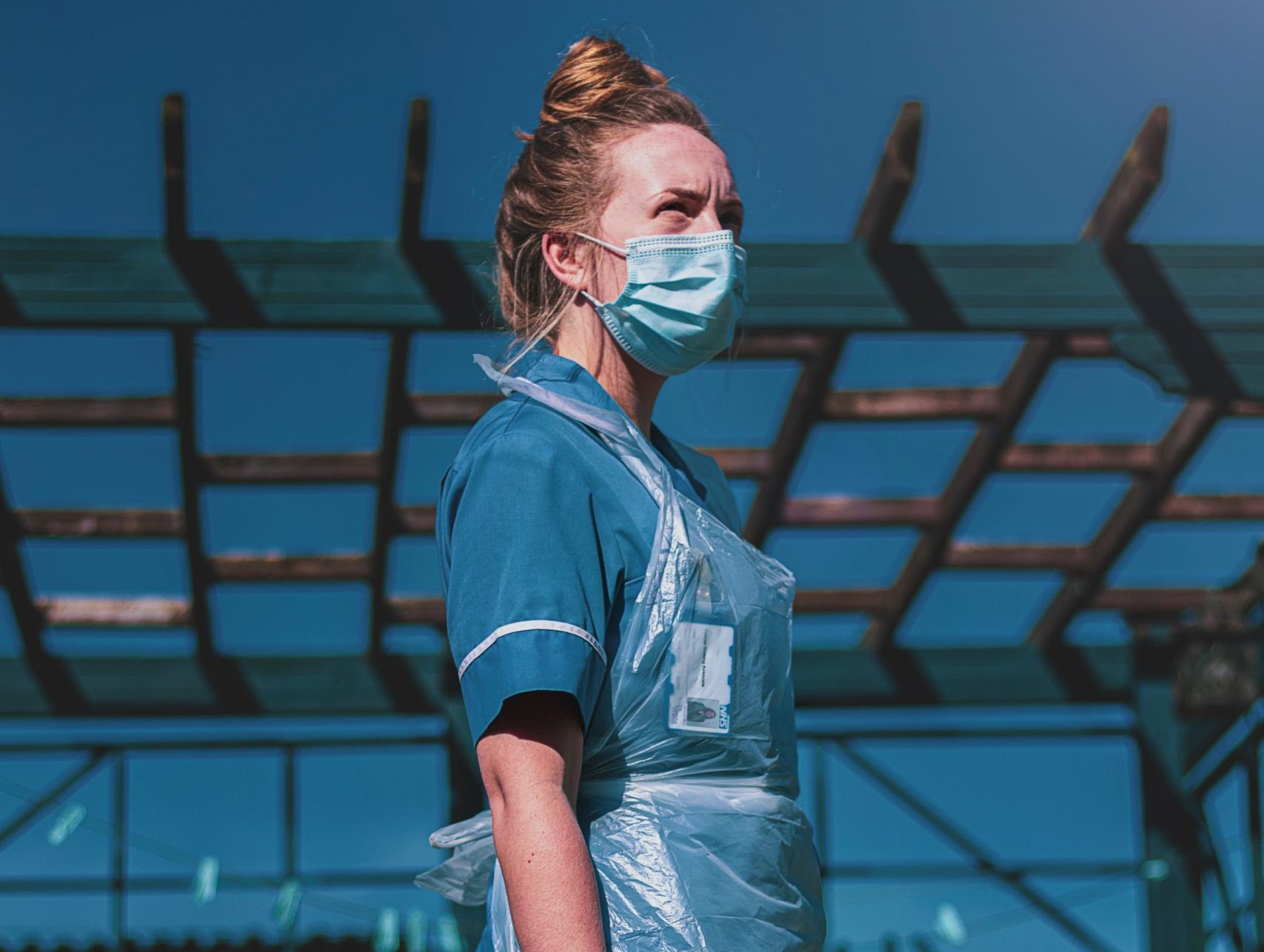 In March as Ohio began to shut down, Emily—a thirtysomething mom who asked that I not use her real name—worried about her family, her neighbors, and especially the elderly. She posted on her town’s Facebook page offering to grocery shop for those unable to go to the store, or to share a meal with anyone who might be hungry, saying that she’d feed them whatever she could out of her own kitchen.

As an essential worker making $13.36 an hour at a Cincinnati warehouse, she also stewed inwardly about what she perceived as unfairness and lack of support for frontline workers, even as those unemployed received an extra $600 a week due to the federal unemployment benefit.

Emily’s anxiety was high in those early weeks of the pandemic—16 coworkers tested positive for coronavirus—and yet it took weeks for the company to access even basic safety measures for their employees like gloves and hand sanitizer. She brought in three big bottles she had at home and set up sanitizing stations for her coworkers. She watched as coworkers used their vacation time to care for children now at home, and took unpaid days when they were sick. She sprayed down the materials she moved in the warehouse—cardboard, copper, pipes—and went from seeing her elderly parents, who were the caregivers for her son, multiple times a day to not setting foot in their house and picking up her son at the threshold after she’d showered, changed clothes, and disinfected everything she could think of.

She was torn between the now-conflicting instincts to protect her family and to provide for them: “I felt I could either keep myself, my mom and dad safe—or lose my job and have no insurance, no income, and no way to pay my bills.” If she chose not to work because she didn’t feel safe, she would not qualify for unemployment. And with all of this stress she couldn’t fathom why the unemployed were being supported more than those who took additional risks and had no choice but continue to work. Of the $600 federal unemployment benefit she told me, “We’re all going to have to pay for it in the end. And I don’t think it’s fair to [essential workers]. We didn’t get bonuses, we didn’t get raises. We got nothing.”

“I guess I am going to vent for a moment. So I get your upset you can’t work and they shut down this and they shut down that. I served and I bartender for years. I know the money that comes in. I get it. But at the same time your at home with you family you have time with your kids and loved ones and at the same time you will be getting checks from the government for unemployment and 1,000 dollar plus check for all the inconvenience. Your not being exposed to the public and your safe from spreading it to your parents and grandparents the most vulnerable. I still have to go to work everyday vendors coming in and out people coming in and out during this.… So if you want to trade places with me then have at it please I would gladly stay at home and keep my kid safe And my parents safe and have less chance of spreading this virus to them. Also spending time with my kid would be a blessing. Not a inconvenience.”

Emily spent years as a single mom to her now 12-year-old son, working whatever jobs she could find serving at restaurants and bartending. She is empathetic towards those in affected industries and would like to see unemployment compensate people at their full income, up to a cap. But she says she knows people currently on unemployment who are making triple their regular income. According to one analysis, around 40 percent of workers could make more on unemployment than by going back to work, and another estimates that the average worker in over half of states stands to make more on unemployment than in their prior job. A CBO report released in early June estimates that if the $600 benefit is extended until the end of January 2021 then close to 80% of people would make more money through unemployment than if they were employed.

It baffles Emily—“where did they get their numbers?!”—that the government would determine roughly $1,000 a week (the average state unemployment of $378 per week plus the $600 weekly federal benefit) as the income necessary to live on when she’s never seen close to that kind of money, and when her elderly parents and other loved ones regularly scrape by on $1,500 a month from Social Security.

Differences in cost of living are certainly a factor, since according to one calculator the cost of living in New York City is 43 percent higher than living in Emily’s town in southwestern Ohio. But what may be essential income for basic necessities in a big city is seen as government largesse by people in suburbs and small towns in much of the rest of the country.

Emily works 40 hours and brings home $356 a week after taxes and the cost of health insurance are deducted from her paycheck. To make ends meet she also spends 8 hours on Saturdays cleaning houses and does other odd jobs. Last year, tired of dealing with repeated “vehicle issues” from old and unreliable cars, Emily picked up Friday and Saturday night shifts at a nearby amusement park and saved $1,000 in order to make the purchase. Her monthly payments are affordable and she also saved enough to purchase car insurance in advance and a full warranty.

“People have to make happen what they want and need. No one is going to give it to you,” Emily says. “So that’s another reason I was upset about the $600 a week bonus for workers that were unemployed.” The beefed-up unemployment combined with a lack of hazard pay or bonus to employees at many essential businesses, like the one where she works, thus strikes at the sense of fairness that Emily values as something basic and fundamental. “I hate to say this, but I feel the government, they help the wrong people. People who have jobs and work really hard need a hand now and then [but] they can’t get it. But others who barely work get whatever they ask for.”

It’s a strong sentiment in the small working-class town where Emily lives. In a lively exchange on the town’s Facebook page people left over 50 comments, many expressing both empathy for those who’ve lost their jobs and consternation at a government that would pay people more to stay home than they regularly make at work. One nursing home aide exclaimed, “When were workers supported? I bust my butt and have been working since covid no government help or assistance at all. I have struggled and still do as a single parent. My daughter who is an assistant day care teacher is bringing home double her income since the shut down…. Yet those who continue to work were left to struggle.”

A man who works installing commercial overhead doors says that owners in his industry are having trouble finding workers. “I work across three different states and there are now hiring signs out everywhere. When you are making more on unemployment than you were employed there is no incentive to return to work.” His teenage son just got his first job at UPS during the pandemic, and says that they are “starving for employees.”

A restaurant owner told me that since reopening in late May he has had difficulty with staffing. At the beginning of the shutdown they had to furlough more than 60 percent of their staff. “When we went to get them back many plainly said, ‘No, it will cost me money.’ The even harder point is that the state requires us then to report the employee and they will then lose the benefit. It’s put a lot of tension in the relationships. It’s been even harder with tipped employees because the dining room business is still way down. We’ve tried to only bring people back that we can keep busy. We then run into problems with our PPP loans because our head count does not return to pre-COVID levels.” He notes that any new legislation needs to consider these tensions, and mentions that recent legislation will help.

In addition, the HEROES Act (H.R. 6800), passed by the House in May, does include hazard pay in the form of a $13-an-hour-raise for essential workers, which could make returning to work more palatable and more justly compensate people for the risks involved at work during a pandemic. In this scenario Emily’s hourly wage would be doubled, paid retroactively back to January 27th, 2020. For workers making less than $200,000 a year the raise would be received until it totals $10,000 ($5,000 for those making over $200,000 annually), or for 60 days after the pandemic ends if the total was not yet reached. In its current form the HEROES Act would also extend the $600 federal unemployment benefit through January 31st, 2021.

What strikes me most as I process these recent conversations is how many full-time working people regularly get by on relatively so little. It ought to get our attention that the amount of income that the federal government discerns as reasonable unemployment compensation is more than double what Emily and many others like her normally make. The discrepancy in perspectives about the $600 federal unemployment benefit reveals the troubling income inequality that we’ve been living with for decades but that still shocks when exposed. It also points to the need for solutions, like wage subsidies, even in “normal” times.

I’ve also noticed that it’s common for debates about public transfers to be framed in a way that demonizes those who oppose a given policy as “cruel and inhumane.” But fairness is a strongly held value in America, and government assistance should be allocated in ways that do not demoralize the people who are—in ordinary times and especially in these times—making heroic sacrifices at work.

END_OF_DOCUMENT_TOKEN_TO_BE_REPLACED

Covid’s Toll on the American Dream

The American Dream — people have hung on to those three little words for decades, passed them down for generations. But it’s hard to see how we can believe in the dream right now. To me, the American Dream is having a good paying job, having good health insurance, earning benefits for your family and […]

The pandemic has placed an enormous burden on the lives of parents and children in particular.