Social Media is an Engineering Disaster Waiting to Happen 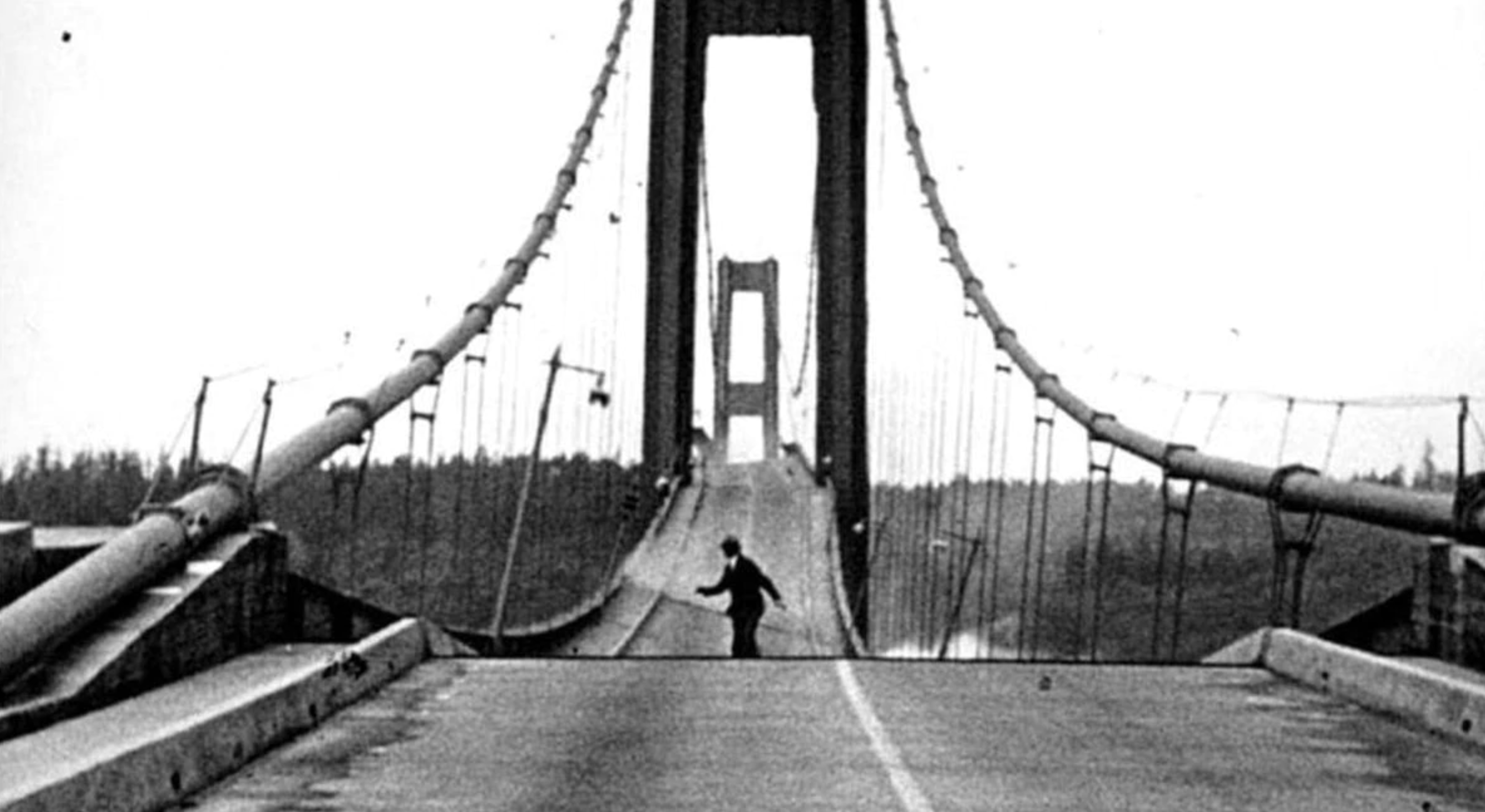 The 1940 collapse of the Tacoma Narrows Bridge is the textbook example of an engineering disaster. You’ve probably seen the footage: In grainy black and white, what was then the third largest suspension bridge in the world twists and oscillates with increasing violence, empty but for a stalled-out Pontiac parked askew on its undulating deck. After one final rhythmic lurch, the cables give way in spectacular fashion, plunging spans of concrete, the car, and an unlucky cocker spaniel into the choppy waters below.

Physics and engineering students will be familiar with the collapse as a somewhat apocryphal illustration of mechanical resonance. As the wind buffeted the bridge, each oscillation became amplified by its concordance with the bridge’s natural resonant frequency, as if it were an enormous tuning fork. The bridge’s constructors were even aware of its tendency to sway and wobble, having nicknamed it Galloping Gertie. Yet in the belief that its enormous mass assured its structural integrity, they failed to account for the nonlinear aerodynamics of a vortex that hit just right.

Our major social media platforms suffer from an analogous structural design flaw. On a normal day, something on Twitter’s trending tab or Facebook’s newsfeed will inevitably catch your eye, causing your attentional resources to sway away from the straight and narrow. While perhaps not ideal for one’s productivity at work, the software engineers have assured us that the bigger picture is stable.

Nevertheless, every now and then, something occurs with such perfect political and cultural resonance as to capture all our attention simultaneously. Be it the immolation of a Tunisian street vendor, or the wanton suffocation of a defenseless Black man, martyrdom appears to be particularly powerful in this regard. Yet whatever the catalyst, opposing ideological forces quickly begin to oscillate back and forth, feeding off each other’s energy, and amplifying our collective outrage in a self-induced fashion. Eventually, society itself begins to buckle under a load that our 20th century institutions were never designed to bear. In less robust social orders, outright regime change has even been known to occur.

Much has been written about the sheer size of companies like Twitter and Facebook. In a time when regulations have made building new physical infrastructure prohibitively expensive, they look to many like the engineering triumphs of our current era. But might they become the new textbook definition of an engineering disaster?

You know the classic nightmare where you’re giving a speech only to look down and realize you’re naked? If that were to happen in real life, at least your embarrassment would be contained to your immediate social network. No longer! In 2020, you get to be humiliated at scale.

Indeed, while gossip and bullying are human universals, on Twitter you’re rewarded for coordinating your indignation, opprobrium, or ironic retorts around whatever happens to be trending globally that day. Emotions and social sanctions that are otherwise functional at a local level thus become absurdly maladaptive. Spontaneous and self-organizing acts of collective punishment strike seemingly at random, like some kind of capricious Old Testament god. This loss of proportionality stems not from a fault in our culture or in ourselves, but from the unprecedented synchronization of what commands our minute-by-minute attention.

Just as the subprime mortgage crisis was caused by the failure of our financial giants to account for correlated risk, the legitimation crises sweeping democracies around the world are caused by the failure of our tech giants to account for correlated rage. Breaking-up or regulating sites like Twitter and Facebook is thus unlikely to be of much help. Creating ten platforms out of two does little to prevent waves of outrage and political disenchantment from propagating between them, like a soundwave traversing from one medium to the next. What’s needed is some mechanism to decorrelate our social media diets, and thus dampen its destabilizing effects.

Fences are said to make for good neighbors. So too with social media platforms. Closed Facebook groups, subreddits, and Twitter niches are typically self-regulating or have formal moderators, and rarely cause problems. That all changes when one’s online interactions are allowed to propagate far beyond the boundaries of real-life or otherwise opt-in social networks.

In epidemiological terms, social media companies have the tools to quarantine memetic viruses. They just choose not to use them. Facebook, for example, could easily dampen the tendency of high engagement, sensationalist content from going viral by restricting the visibility of posts that don’t originate from within your friend network or geographical area. Twitter, meanwhile, could simply abandon the trending tab altogether.