The Seduction of the Not-Profit Economy 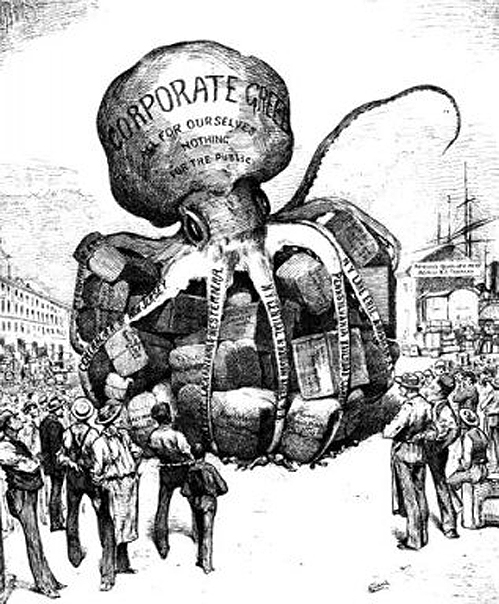 Over the last several decades a major shift has occurred in how many U.S. elites – pundits, advocates, policy makers, and others – think and talk about corporations. For much of the 20th century most elites viewed corporations as an institutional tool by which America could best achieve its most important economic goals: innovation and increasing living standards. To be sure, there would always the occasional Enron or Tyco scofflaw, but these were seen as the exception, to be prosecuted and shunned.

No more. Today anytime anyone wants to delegitimatize any company or industry for any reason, it’s enough now to note that the company or industry in question is seeking to make a profit. Trying to earn a return on invested capital is now assumed to mean that the corporation’s entire mission is tainted by this original sin. (It’s still okay for small business to be motivated by profit, just not big business.)

Its not surprising that the socialist Jacobin magazine argues that we need to “shift our economy and society away from private profit and toward the fulfillment of social needs.” But this “not-profit” view is now held by more than a few self-avowed Che Guevara t-shirt-wearing socialists.

Now the emerging left-of-center consensus is that corporations are corrupt vehicles for economic progress with the profit motive preventing them from doing the right thing.

One academic argued that Facebook should hire thousands more content moderators instead of also relying on AI algorithms and that the only reason they don’t is that “they would not be nearly as profitable.”

Senator Elizabeth Warren (D-MA) wants to “blame Internet service providers … which have maximized their profits at the expense of rural towns, cities, low-income communities and communities of color across the country.” In other words, if we had not-profit ISPs they we’d long ago have had “fiber to the cabin.”

Lawrence Capello writes in The Nation that “it’s the profit motive which leads companies to monetize data, arguing that “because privacy and profits did not mix, the United States entered the Internet age with privacy protections that most scholars agree were wholly inadequate.”

The cochairs of the House Progressive caucus, Mark Pocan (WI-02) and Pramila Jayapal (WA-07), argue that with regard to “Big Pharma, saving lives is incidental to their business model – the profit motive always comes first.”

Cynthia Estlund writes in the Yale Law Journal that the profit motive is why companies invest in “job destroying” automation capital, stating that “at the point that robots can perform as well as or better than humans at a lower cost, they will be irresistible for firms in competitive markets, lest those firms lose profits, market share, and investors. That is indeed ‘not rocket science’; it is Capitalism.”

The core problem with this ideological belief is that even if America were to somehow shift from a for-profit economy to a “not-profit” economy – the agenda of most progressives – few of these behaviors would actually change.

To do any of these things would mean they would lose money and either have to cut wages or raise prices. And unless non-profit co-ops were exempt from anti-trust laws and colluded to raise prices and suppress wages, the ones that didn’t act like for profit companies would lose market share to the ones that did. And pretty soon, who knows, worker co-ops would start opening up lobbying shops on K Street to press for lighter regulation, more government subsidies, and a host of other benefits.

So whenever anyone says that the reason something doesn’t happen is because the company producing the good or service is for-profit, imagine how a non-profit company would act any differently, even if they desperately wanted to.

Notwithstanding this reality, I sympathize with the allure of demonizing for-profit and celebrating not-profit. For half a century, Chicago school, free-market ideologues demonized government and celebrated profits. Instead of engaging in needed conversations about the limits of the for-profit business model, especially one supercharged by short-term Wall Street interests, it was assumed, as Milton Friedman famously stated, that “there is one and only one social responsibility of business–to use its resources and engage in activities designed to increase its profits so long as it stays within the rules of the game, which is to say, engages in open and free competition without deception or fraud.”

After 50 years of free-market dominance, many on the left have simply given up on for-profit business: the challenges of enacting proper regulation and expanding government where needed to fill the gaps, such as funding for rural broadband, expanded and subsidized access to drugs, and a much stronger safety net for laid off workers, were just too high. In this sense, free-market ideologies reaped what they sowed, a Schlesingerian, extremist backlash, rather than a nuanced and rational discussion about the proper roles of business and government.

We can only hope that we are not in for another half century of governance extremism, only this time, demonizing business instead of government. But alas, I fear we are.