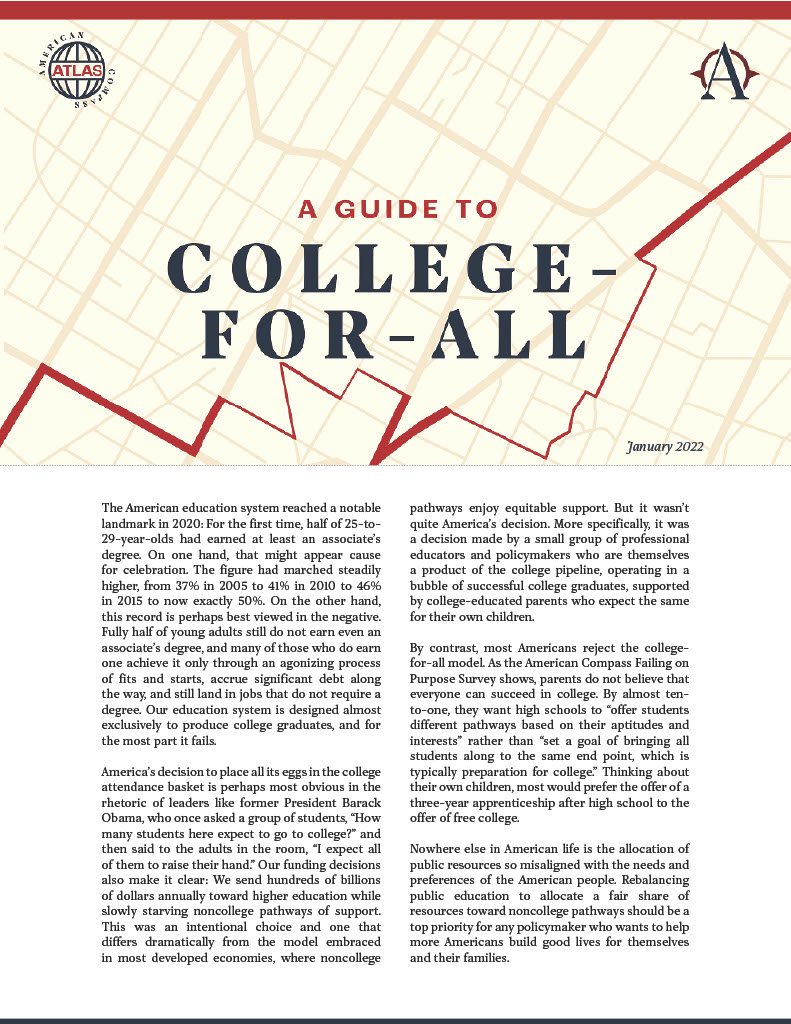 The American education system reached a notable landmark in 2020: For the first time, half of 25-to-29-year-olds had earned at least an associate’s degree. On one hand, that might appear cause for celebration. The figure had marched steadily higher, from 37% in 2005 to 41% in 2010 to 46% in 2015 to now exactly 50%. On the other hand, this record is perhaps best viewed in the negative. Fully half of young adults still do not earn even an associate’s degree, and many of those who do earn one achieve it only through an agonizing process of fits and starts, accrue significant debt along the way, and still land in jobs that do not require a degree. Our education system is designed almost exclusively to produce college graduates, and for the most part it fails.

America’s decision to place all its eggs in the college attendance basket is perhaps most obvious in the rhetoric of leaders like former President Barack Obama, who once asked a group of students, “How many students here expect to go to college?” and then said to the adults in the room, “I expect all of them to raise their hand.” Our funding decisions also make it clear: We send hundreds of billions of dollars annually toward higher education while slowly starving noncollege pathways of support. This was an intentional choice and one that differs dramatically from the model embraced in most developed economies, where noncollege pathways enjoy equitable support. But it wasn’t quite America’s decision. More specifically, it was a decision made by a small group of professional educators and policymakers who are themselves a product of the college pipeline, operating in a bubble of successful college graduates, supported by college-educated parents who expect the same for their own children.

By contrast, most Americans reject the college-for-all model. As the American Compass Failing on Purpose Survey shows, parents do not believe that everyone can succeed in college. By almost ten-to-one, they want high schools to “offer students different pathways based on their aptitudes and interests” rather than “set a goal of bringing all students along to the same end point, which is typically preparation for college.” Thinking about their own children, most would prefer the offer of a three-year apprenticeship after high school to the offer of free college.

Nowhere else in American life is the allocation of public resources so misaligned with the needs and preferences of the American people. Rebalancing public education to allocate a fair share of resources toward noncollege pathways should be a top priority for any policymaker who wants to help more Americans build good lives for themselves and their families.

Part I: All-In on College-for-All

Americans often take for granted that high schools should focus on academic preparation for college and that college enrollment is the natural next step after high school graduation. This makes us an extraordinary outlier among developed nations. The Organisation for Economic Cooperation and Development (OECD) reports that most of its member nations have 35–55% of their upper secondary students enrolled in vocational education and training. The only country excluded from the data is the United States, because “in the United States, there is no distinct vocational path at upper secondary level.”

The American attitude, by contrast, is well expressed by former President Barack Obama, who proudly conflated equal opportunity and “making it” with college attendance.

Dramatic investments in K–12 education were supposed to boost academic achievement, helping prepare all students for college success. This has not happened. To the contrary, while K–12 spending per pupil has doubled in real terms over the past 50 years, reading scores for 12th graders on the National Assessment of Educational Progress (NAEP) have gone nowhere.

With no sign of improvement in college readiness, and an increasing share of students failing to meet the most basic threshold for achievement, one might expect high-school graduation rates to remain steady or even fall. Instead, high schools have awarded passing grades and diplomas to a steadily increasing share of students, ever more of whom proceed to enroll in college.

The focus on higher education, and the rising share of students enrolling, has led to an explosion in public funding for colleges and universities. Total public support now exceeds $200 billion annually.

But the increase in public spending on higher education is not just a result of more students attending. Adjusting for total enrollment, public spending per pupil has also exploded in real terms, increasing 50% over the 25 years from 1993 to 2018. That’s even faster than per-pupil spending has been increasing in the K–12 system. And that’s on top of the massive costs that students and their families bear themselves.

The problem is not that many more students are enrolling in higher education, or that public funds go to supporting those programs. The problem is the failure to produce successful college graduates. Enrollment is rising much faster than completion; the past two generations have seen little change in the share of young Americans achieving a bachelor’s degree by age 25.

Only about half of those who enroll in college will have completed a degree even six years later. The problem is especially acute in two-year programs, typically at community colleges, where only about one-in-four will have earned a degree.

Many people who do manage to complete college still find that their degree does not offer the value they expected. According to the Federal Reserve Bank of New York, about 40% of recent college graduates are employed in jobs that do not require a degree.

That leaves just 18 of 100 young Americans—call them the Fortunate Fifth—actually moving smoothly from high school to college to career.

In a well-functioning education system, young adults who followed different pathways might all see the system as having worked well for them. But in America, while young adults who have earned a bachelor’s degree are likely to say that “the public education system prepares someone like me for success in life” (53% agree / 37% disagree), those without a bachelor’s degree feel the opposite (30% agree / 55% disagree).

Progressive policymakers eagerly tout “free college” as a solution, but it is only the young adults who have earned bachelor’s degrees (and their parents) who agree. Among the majority of Americans (and their parents) who do not earn bachelor’s degrees, the idea of a three-year apprenticeship after high school is much more appealing than a free ride at any college to which they are admitted. Even among parents whose children did earn degrees, more than 40% find the three-year apprenticeship appealing.

Education reformers have built a system of, by, and for the college-educated, allocating nearly all resources toward supporting students headed toward college completion and leaving everyone else behind. The Fortunate Fifth who proceed smoothly from high school to college to career are the “winners” in our modern economy, which makes focusing public resources on them deeply regressive. At a minimum, policymakers should allocate resources toward and focus attention on pathways in proportion to the share of students who will be best served by each. This will require reallocating most spending away from colleges and toward noncollege pathways that equip high school students with the skills to transition from high school into productive jobs and good lives in the communities where they live.