The family is the indispensable institution, the only one capable of producing a next generation and preparing it for the burdens of productive citizenship. Its ongoing collapse poses the greatest threat to American liberty and prosperity.

Beginning in the 1960s, a rising share of children have been born to single mothers and raised in unstable households. More recently, marriage and fertility rates have fallen to the point that more 30-year-olds are living with their parents than are married and parents themselves. In 2020, only 2.1 million American children were born annually into married families, compared to 3.1 million in the late 1960s, though the population has nearly doubled over that period.

Meanwhile, and relatedly, supporting a family has become more difficult. Middle-class wages have stagnated and costs have risen, so that the essentials of housing, health care, transportation, and education that would have cost a typical earner 30 weeks of income in 1985 now consume more than an entire year’s income. Many families have adjusted by having both parents work, and work more hours, and the steady drumbeat of proposals for subsidized childcare and paid leave aim to universalize that model. But most families would prefer to have a parent staying home with the young kids they have, and financial constraints are the most commonly cited obstacle to having more.

At American Compass, we work to understand the confluence of social, technological, and economic forces undermining family formation and flourishing. We develop policies to counter those forces, with a focus on creating economic conditions in which a typical worker’s income is sufficient to support a family.

The Home Building collection examines the myriad ways that public policy affects family formation and stability, both directly and through its influence on the broader economy and culture. Essays from prominent scholars consider how to define family and frame the public interest in promoting it, which challenges to focus on, and what tools policymakers have at their disposal. A two–part survey of parenting-age Americans provides the often-missing context of their varied circumstances, goals, and policy preferences.

We have focused particular attention on the idea of a “child allowance” or “family benefit.” In early 2021, Senator Mitt Romney proposed the Family Security Act, which would give each family several hundred dollars per month for each of their children. American Compass’s Oren Cass and Wells King offered their own proposal for a Family Income Supplemental Credit (Fisc), which attracted widespread interest from conservative analysts and policymakers who preferred how it targeted support to working families. Cass argued for the advantages of this approach in the New York Times and in an event with Sen. Romney. In 2022, Senators Romney, Richard Burr, and Steve Daines proposed a revised Family Security Act 2.0 that adopted the Fisc’s structure and received widespread praise from conservatives. Senator Josh Hawley has proposed a family benefit that uses the Fisc’s framework as well.

Countless policy tools beyond direct financial support also offer vital buttresses. For instance, the Home Building collection features a brief symposium of Proposals to Make America More Family-Friendly, while A Home Security System highlights the many ways that entitlement programs and employer benefits could better serve homemakers. Often, the tools fall under other headings, for instance as Education, Labor, or Tech policy. Just as policymakers have become adept at viewing almost any question through the lens of economic growth, they must learn to ask how all their choices affect the family. 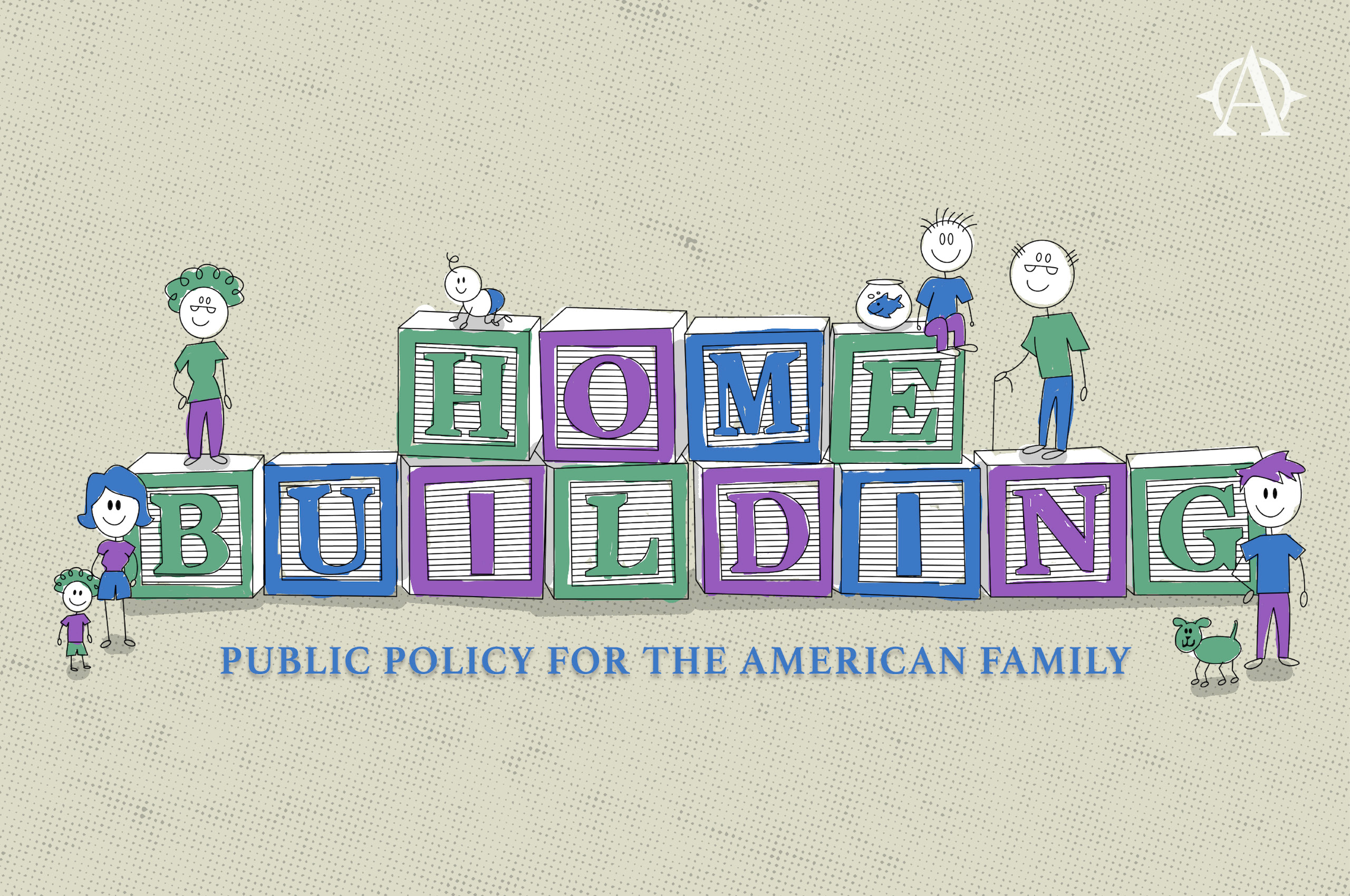 Writers and analysts from across the right-of-center apply a family-focused lens to contemporary policy challenges.

A significant opportunity exists for bipartisan cooperation on a permanent, expanded Child Tax Credit that maintains a connection to work.

A Family Tree: The Past and Present of Public Policy and the American Family

The American family may have entered a period of crisis, but a rich conservative literature—from political philosophy to sociology to journalism—can help us to better understand the root causes and guide policy reforms to the family’s renewal.

American attitudes about family structure vary widely, but most families see a full-time earner and a stay-at-home parent as the ideal arrangement for raising young children.

Home Building Survey Part I: State of the American Family

Across all classes and regardless of parental status, 60 to 75% of Americans say that the government should do more to support families.

Pursuing the Reunification of Home and Work

The conflict between responsibilities at home and at work is largely the result of economic transitions to which we still—nearly a century after industrialization and 50 years into the modern feminist movement—have not adequately responded.

The Government Should Keep Its Hands Off Your Medicare

The path to a more secure and generous American welfare state lies not in rejecting the work ethic and the distinction it makes between contributory social insurance and non-contributory social assistance, but rather in embracing it.

A pro-worker agenda must treat families, not individuals, as the basic units of public policy.

Addressing our fertility and family-formation crises will require us to push the boundaries of family policy and embrace a whole-of-society approach.

Why Bother With Family?

If conservatives do not speak for the family, who will?

Family Financial Security: Senator Mitt Romney on the Right’s Fight to Support Our Most Important Institution

A conversation with Senator Mitt Romney about the future of family benefits in the U.S. and what it means for the right-of-center’s future.

The Niskanen Center’s Samuel Hammond and the American Enterprise Institute’s Scott Winship debate the case for a “child allowance.”

Post-Roe, the GOP Is Stepping Up To Support American Families

American Compass’s Wells King and Brad Wilcox of the Institute for Family Studies and AEI make the case for a conservative embrace of an expanded Child Tax Credit in a post Roe v. Wade world.

Executive director Oren Cass on how left-wing critics of our family-benefit proposal are sorely misguided.