Equipping Americans to build decent lives in their communities

Public education is one of America’s great achievements and has been vital to the nation’s success as a democracy, its rise as the world’s dominant economy, and the flourishing of its citizens.

Unfortunately, policymakers have forgotten what public education is for, pursuing decades of reform that sought to increase test scores and college attendance but served mainly to strip-mine academic talent from local communities while serving poorly the vast majority of young people.

Our national obsession with “College for All” has failed on its own terms: hundreds of billions of dollars in annual subsidies flow to higher education while almost no support goes toward non-college pathways, yet fewer than 1-in-5 young Americans go smoothly from high school to college to career. And it has failed even to aim in the right direction: Americans see equipping young people with the skills and values to build decent lives in the communities where they live as more important than maximizing academic achievement.

At American Compass, we work to understand what Americans want from the public education system and where that system is failing them. We develop reforms at the local, state, and federal levels to address those failures.

The Failing on Purpose collection features essays from leading scholars on the proper goals for public education and survey data on the attitudes of young Americans and their parents.

What has gone wrong? Our Guide to College-for-All presents the latest data on how policymakers have misallocated resources in pursuit of the wrong priorities, while the Failure to Launch survey depicts the catastrophic outcomes that are the result. Our report on The False Promise of Good Jobs demonstrates the mismatch between the obsession with producing college graduates and the skills demanded in the labor market.

What can be done? The Retooling American Education symposium convenes a wide range of policy experts and practitioners to describe practical steps that policymakers can take to refocus public education on the non-college pathways that would best serve most Americans. In particular, our policy paper introducing The Workforce-Training Grant describes a comprehensive approach to the development of a robust, employer-led training system, a version of which Senator Tom Cotton has introduced as the American Workforce Act.

An important argument running through this work is that expanding options and funding alternatives is not enough: The existing higher education industry must also be cut down to size. One reason is that much of the money is simply wasted, and reallocating it offers a budget-neutral opportunity to improve public services. Another is that excessive spending has created toxic economic and cultural incentives for young people to spend their late adolescence enjoying the “amusement park entitlement” of a college campus, no matter the cost. Wiser policy should support those for whom college is a worthwhile investment while holding colleges and universities responsible for serving students well.

The Banality of Student Loans makes the case for reconfiguring higher education financing to offer a single, standard grant that covers partially the cost of a public university degree and then leaving the industry to take financial responsibility for its own results. Escaping the Bachelor’s Fad describes, and proposes an escape from, the vicious cycle in which equating a college degree with competence and success leads employers to demand one, further reinforcing the need to pursue one, even as millions of capable workers without degrees are excluded from good jobs. 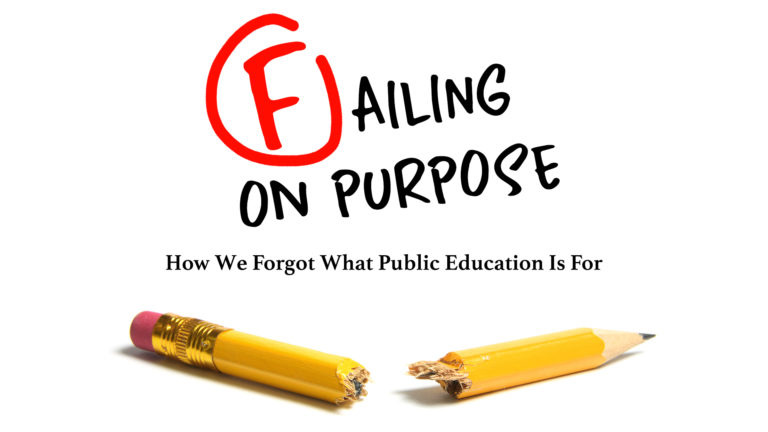 How We Forgot What Public Education Is For

Public policy should recognize that employers, not universities, often provide the most socially valuable form of training and should redirect public resources accordingly.

How to Move Beyond College-for-All

For noncollege pathways to be viable, policymakers must reduce employers’ needless demand for college degrees.

In the popular imagination, young Americans leave home to attend college, where they earn degrees that launch them into careers. The actual experience is radically different.

The False Promise of Good Jobs

The college-for-all model fails most Americans in favor of a “Fortunate Fifth” who proceed smoothly from high school to college to career.

The American Compass Failing on Purpose Survey explores the perspectives and experiences of those in closest contact with the American education system—namely parents, current students, and recent graduates.

A Nation of Boys at Risk

After decades of intensive effort and investment to create an equitable education system, not least for girls and women, the nation finds itself with a peculiar predicament: It is boys who are falling behind furthest and fastest.

The School of Self-Rule

On this episode of Policy in Brief, Oren Cass and Chris Griswold discuss how we should finance higher education in the U.S.

Congresswoman Virginia Foxx joined us for a 30 Minutes discussion of how the education system can be retooled to better serve all Americans.

Oren Cass joins Paul Ollinger for a discussion of student debt, “college-for-all,” and how to rethink our approach to education in the U.S.

How ‘College For All’ Is Failing Generations Of Americans

American Compass executive director Oren Cass joins The Federalist’s Emily Jashinsky to discuss the failures of the “college-for-all” model in the U.S.

After Student-Debt Relief, America Must Move Beyond ‘College for All’

Biden’s Student Loan Forgiveness is Wrong. Here’s How to Handle College Debt Instead.

College Is Not for All

American Compass’s Oren Cass and Wells King discuss the reality that most young Americans miss out on commencement.

American Compass’s Oren Cass makes the case against forgiving billions of dollars of student debt and for rethinking our approach to higher education.

In a Dealbook feature collecting ideas from a wide variety of leaders on how to improve the country, American Compass’s Oren Cass argues for shifting our focus away from college and toward providing strong, non-college career pathways.