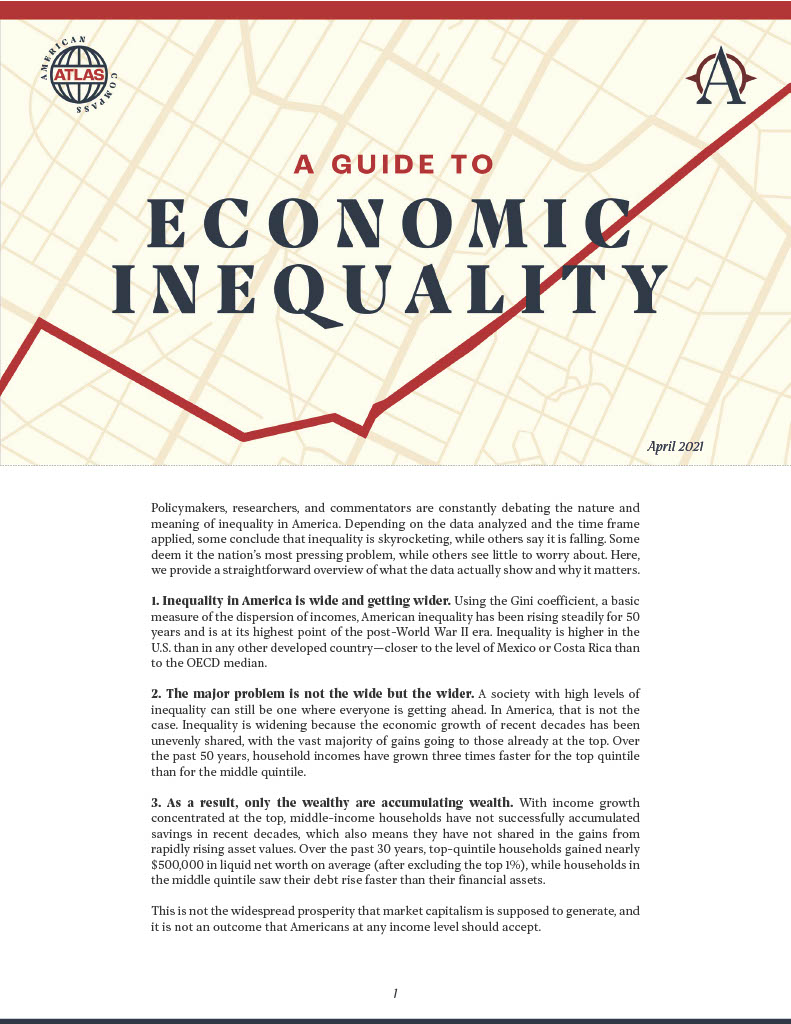 Policymakers, researchers, and commentators are constantly debating the nature and meaning of inequality in America. Depending on the data analyzed and the time frame applied, some conclude that inequality is skyrocketing, while others say it is falling. Some deem it the nation’s most pressing problem, while others see little to worry about. Here, we provide a straightforward overview of what the data actually show and why it matters.

1. Inequality in America is wide and getting wider.

Using the Gini coefficient, a basic measure of the dispersion of incomes, American inequality has been rising steadily for 50 years and is at its highest point of the post-World War II era. Inequality is higher in the U.S. than in any other developed country—closer to the level of Mexico or Costa Rica than to the OECD median.

2. The major problem is not the wide but the wider.

A society with high levels of inequality can still be one where everyone is getting ahead. In America, that is not the case. Inequality is widening because the economic growth of recent decades has been unevenly shared, with the vast majority of gains going to those already at the top. Over the past 50 years, household incomes have grown three times faster for the top quintile than for the middle quintile.

3. As a result, only the wealthy are accumulating wealth.

With income growth concentrated at the top, middle-income households have not successfully accumulated savings in recent decades, which also means they have not shared in the gains from rapidly rising asset values. Over the past 30 years, top-quintile households gained nearly $500,000 in liquid net worth on average (after excluding the top 1%), while households in the middle quintile saw their debt rise faster than their financial assets.

This is not the widespread prosperity that market capitalism is supposed to generate, and it is not an outcome that Americans at any income level should accept.

This pattern repeats throughout the income distribution, with the higher income tiers pulling away from those lower down.

The Census Bureau calculates a standard measure of income inequality called the “Gini coefficient” and finds that it has been rising steadily in America for decades.

Inequality is higher now than at any time since World War II.

The American experience is an outlier. According to the OECD, which reports Gini coefficients for all of its members, the U.S. Gini coefficient is among the highest of any developed economy.

Our level of inequality is closer to that seen in Latin America than in Europe.

The problem with rising inequality is not that some people are doing well, but that others are falling behind. It suggests that our economy is failing to spread prosperity and that our gains are not being widely shared.

The longer such trends continue, the greater the threat to our social fabric, our political solidarity, and the legitimacy of our free-market system.

We seem to take for granted that this is how things go, but there’s no reason it should be the case—one could just as easily imagine a trend in which those at the top experienced the slowest growth and the income distribution compressed.

With faster growth at higher income levels, household incomes diverge. Over the past 40 years, the growth rate of household income in the top quintile has been three to four times faster than in the middle class.

As a result, higher-earning households have seen their share of the nation’s income rise while that of middle- and lower-class families has declined.

All told, the top quintile increased its share of national income by 9 percentage points over the past 50 years and now earns the majority of the nation’s income. All other quintiles saw their shares decline, with the middle quintile’s 3-point loss the largest.

A 3-point decline in the middle quintile’s share of national income may not sound like much, but it represents an enormous shift in earnings. If the middle class had shared equally in the economic growth of the past 50 years, maintaining its 17.5% share of national income instead of experiencing a decline to 14.1%, the typical household would earn an extra $17,000 annually.

Higher income translates to greater disposable income and thus a greater opportunity for saving, which accumulates over time. Government transfer programs help to meet the needs of households lower down the economic ladder, but they rarely provide the opportunity to amass reserves.

Thus, while the net worth for a median-income household rose by about $12,000 over the past 30 years, after adjusting for inflation, a household between the 80th and 90th percentile of income added 10 times as much wealth.

Estimates of net worth overstate the financial health of the typical family, though, because they include the value of the family’s home. Rising home prices are encouraging, but so long as each household requires a house, selling one and using the money for something else isn’t really an option. Other homes will have gone up in price, too.

Looking at just financial assets—cash accounts, stocks, bonds, and so forth—the typical household has added almost no wealth in the past 30 years.

Across the income distribution, the pattern of wealth accumulation looks similar to that of income growth, only amplified. The bottom two quintiles see declines in wealth, while the middle quintile treads water. Meanwhile, the 80th–90th percentile experiences dramatic gains, and the top 10% is omitted from the chart entirely—its wealth is about five times higher still.

Middle-class households have managed to maintain some limited financial liquidity, but in the process, they have doubled their levels of debt. Offset the small increase in liquid assets with the much larger increase in debt, and 30 years of extraordinary economic growth for the nation as a whole translates to a worsening financial picture for the typical household. By contrast, the average top-quintile household (leaving out the top 1%) is up almost half a million dollars.

Whether these trends are sustainable, and what options policymakers have for altering the nation’s economic trajectory, are among the vital policy debates for the years to come.