A review of hedge fund and private equity performance through the COVID-19 market crash.

Coin-flip capitalists defend the poor performance of hedge funds, as compared to simple index funds, by rejecting the comparison. Index funds are liquid assets available cheaply to risk-tolerant retail investors seeking high (if volatile) returns correlated closely to the broad economy’s performance. Alternative assets are available only to large, accredited investors who pay high fees to accomplish different portfolio goals. They may deliver persistently subpar returns in a bull market, but that’s by design—they “hedge” against a market downturn. Just wait until the next crash, then you’ll see.

The first half of 2020 provided a convenient opportunity to test this case. The onset of the Covid-19 pandemic devastated markets, sending the S&P 500 down 34 percent in just 33 calendar days. Then, despite mass unemployment and government-mandated shutdowns, equity markets rallied back. After falling nearly 20 percent in the first quarter, the S&P rose 21 percent in the second. The American economy may have been tied down, but in the parallel universe of Wall Street, the bulls were charging.

The money managers collecting billions in fees to “hedge” against such crashes failed to do so. Hedge fund returns for the first quarter were -11 percent. Better than the S&P 500, to be sure, but less than 1 point better than the simple balanced portfolio (60% stocks and 40% bonds) that the Returns Counter uses to model a low-fee approach to lower-risk investing.

By the second quarter’s end, an investor in a typical hedge fund would have lost 1.5 percent on the year, compared to a 3 percent loss in an S&P Index 500. That was the “hedge” for which investors have sacrificed nearly 9 points of gain every year for the past decade. Meanwhile, the conservative retail investor in a balanced portfolio hedged more successfully and wound up the year’s first half with a one-percent gain.

Not all hedge funds suffered during the Covid crash. One-in-four had positive returns, according to Bloomberg, and some elite funds scored big. Bill Ackman’s fund, Pershing Square, delivered a 100x return in March alone, turning $27 million in credit protection into $2.6 billion. For the year, managers of the world’s top ten hedge funds earned $20.1 billion. Still, the experience was “a gut punch,” according to AQR’s Cliff Asness—to not only his fund’s strategy, but the industry as a whole. Three-in-four funds lost money, some down as much as 40 percent. Fortunately for those who failed, exorbitant fees were typically collected regardless.

Private equity had a better first half of 2020, because its fund managers have the flexibility to minimize the effect of market volatility on the stated value of their holdings. Indeed, this accounting fiction is part of what qualified investors are paying for—“it may be phony happiness,” says the CIO of Idaho’s public pension fund, “but we just want to think we are happy.” Thus, buyout funds reported a decline of just 9 percent in the first quarter and venture capital fell by less than 3 percent—beating the S&P 500 11 and 17 percent, respectively.

But, as they say, what doesn’t go down, can’t go up. Having never recorded losses in Q1, there were fewer gains to report in Q2. While the S&P 500 surged by 21 percent in the second quarter, private equity booked a gain of just 10 percent. When the dust settled at the end of the year’s first half, buyout funds had netted zero return and venture capital was up 7 percent, as compared to the S&P500’s -3 percent.

The roller-coaster ride underscores the private-equity industry’s opacity and the skepticism warranted about reported returns. As noted in the Coin-Flip Capitalism Primer, practitioners and analysts disagree over the best way to calculate returns and determining the precise value of private equity assets at a given point in is more art than science—less mark-to-market than “mark-to-make-believe.” Private equity’s advantage may be in shielding itself from scrutiny, not volatility.

Now updated with data from the first and second quarters of 2020, the Returns Counter continues to show private funds underperforming the public market. Hedge funds trail both the S&P 500 and a balanced portfolio by wide margins. Private equity’s venture capital and buyout funds narrowly trail the S&P 500 in the most recent ten-year window, as has been the case for most of the last 11 quarters. 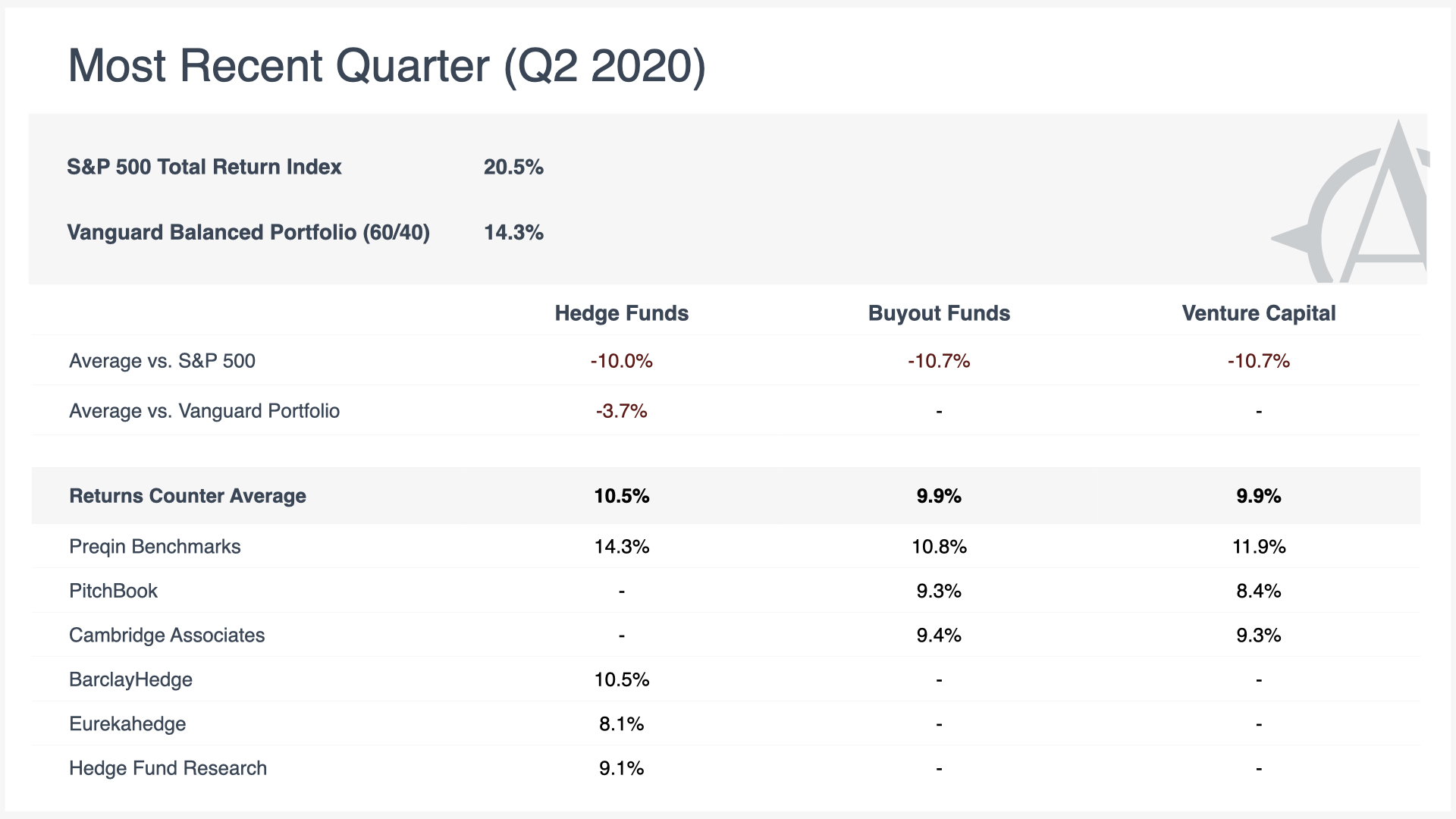 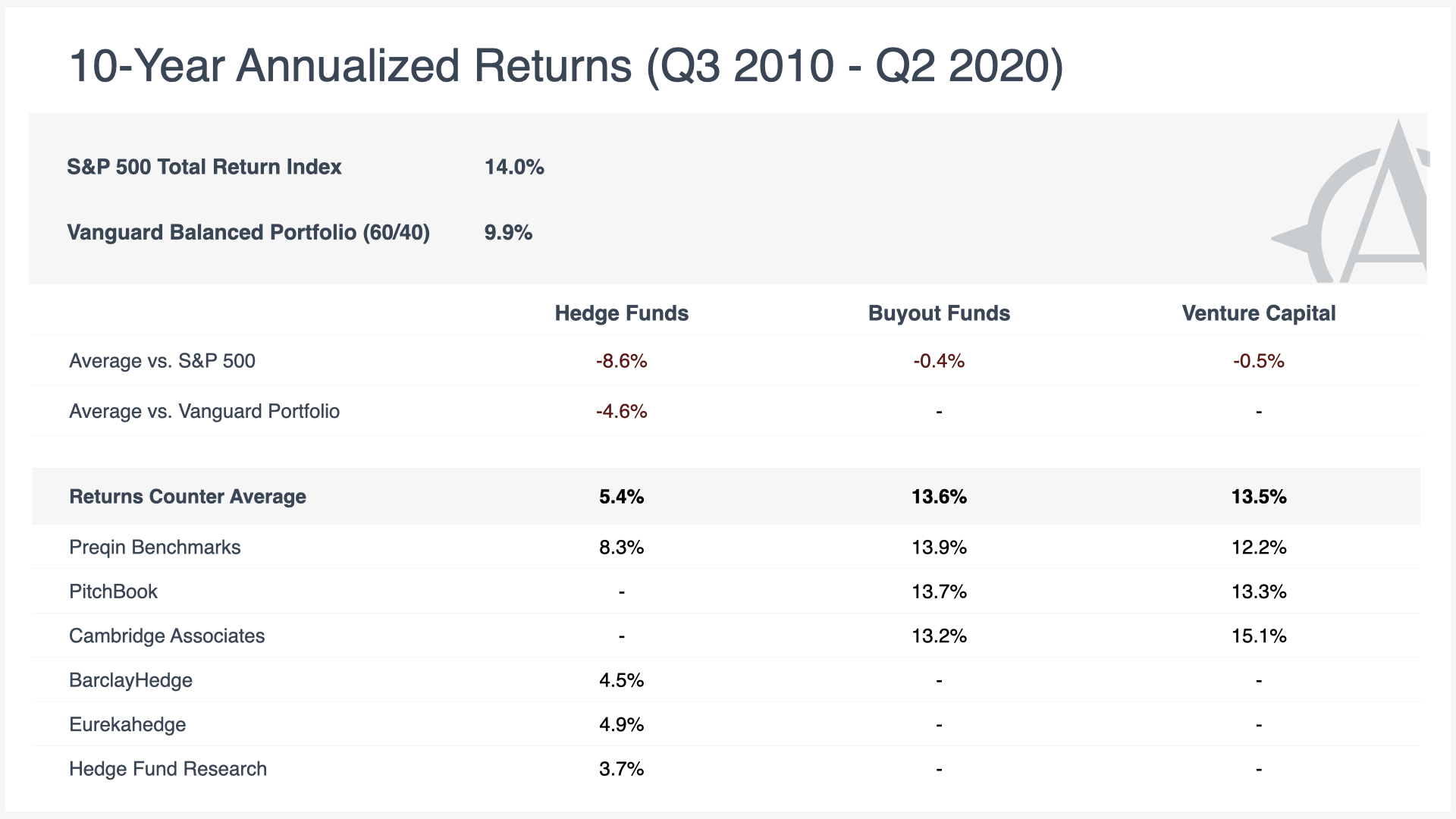 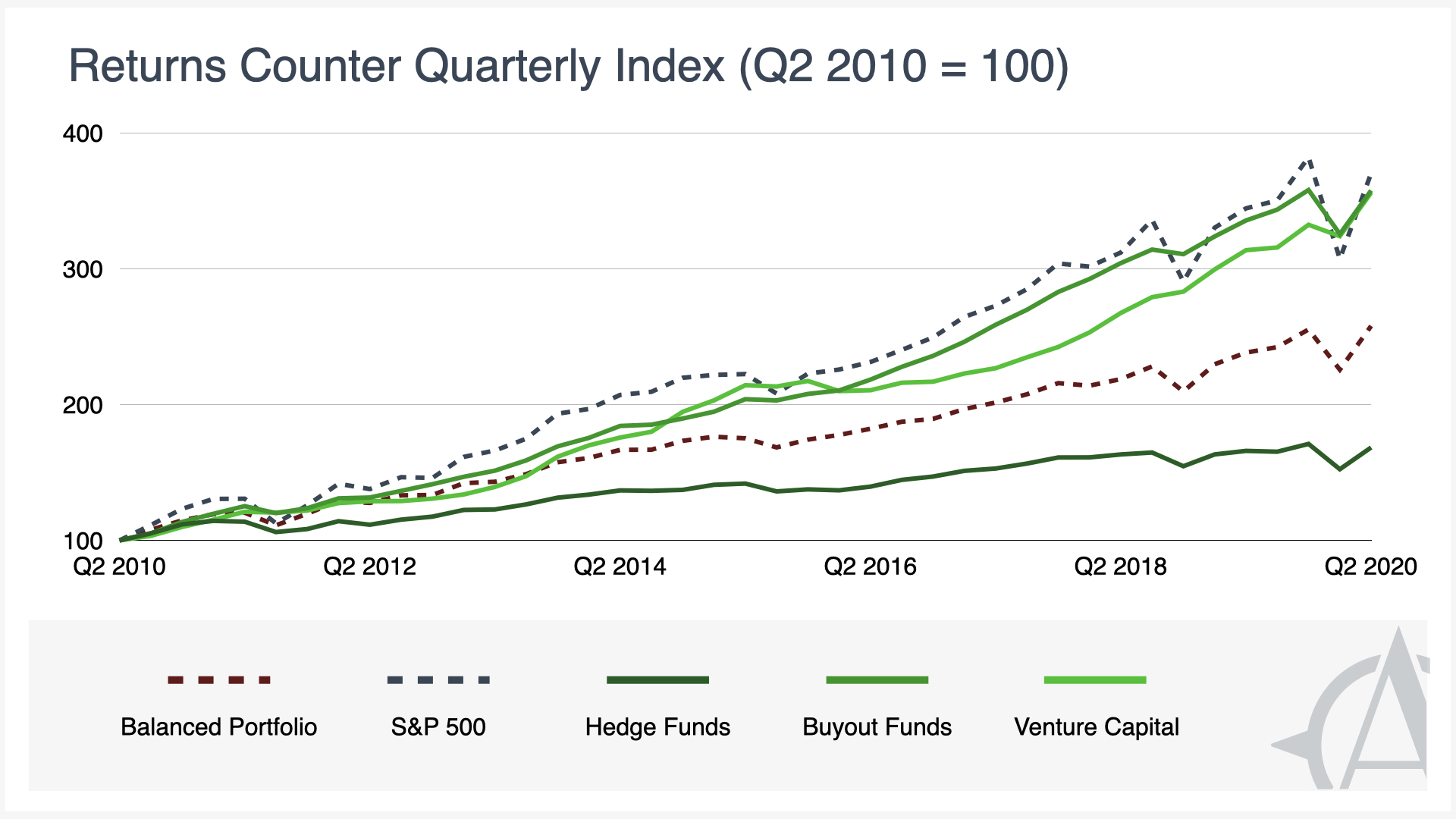 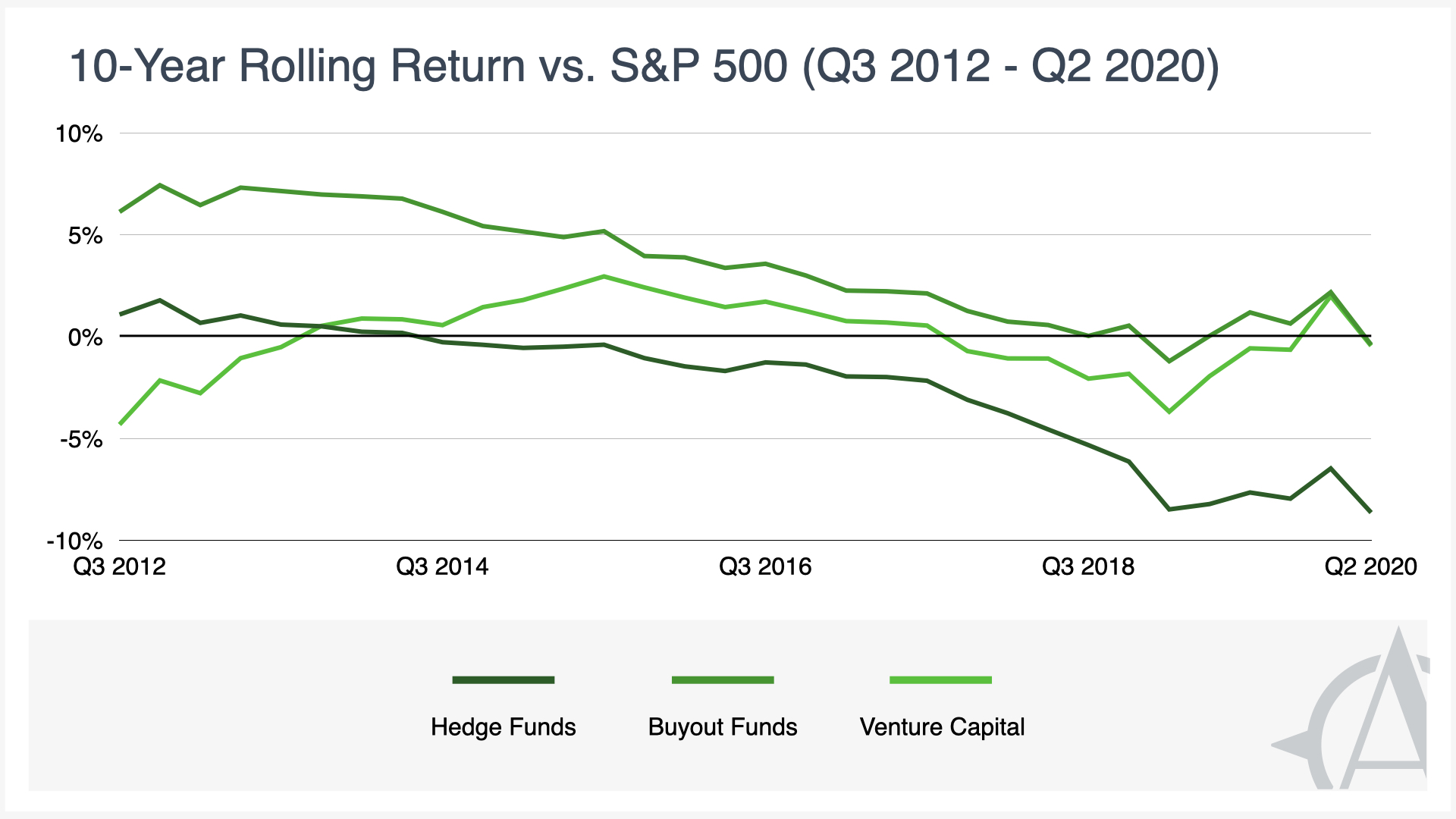