I suppose I could do worse than sound like Louis Brandeis. Your own argument, I note, is downright Churchillian: sectoral bargaining is the worst form of labor-management relations, except for all the others.

That logic appeals to me. Indeed, I consider it among conservatism’s most unfortunate hobgoblins that examples of public-sector failure are treated as decisive evidence of universal infirmity, while comparable private-sector failures are dismissed as inconsequential, which leaves “the market” entrusted with more faith than it deserves. The existence of a foolish union contract gets taken as a case against unions, full stop, even though, as you note, managers in plenty of businesses and industries have shown themselves perfectly capable of succumbing to sclerosis on their own, and taking workers down with them. No one says, “gosh, CEO so-and-so ran that company into the ground, so much for market capitalism.”

The real question should be what if any forms of organized labor make better or worse economic outcomes more or less likely. Our enterprise-level Wagner unions do seem to make things worse, but sectoral bargaining—especially when paired with local-level works councils expressly designed to promote flexibility—might very well make things better. Or at least, whatever disadvantages they have in terms of “dynamism,” they may compensate for in other ways. Certainly, the nonunionized labor market has performed poorly on the dimension of “spreading prosperity widely,” and that’s a dimension that matters quite a lot.

Still, a fine new system of organized labor falls squarely in the category of “easier said than done.” No other country’s arrangement will fit neatly in ours, nor do we have established institutions that know how to engage in this new relationship, nor laws and norms to guide them. And of course there’s political reality. So how do we get from here to there?

It seems obvious, at least to me, that the path forward is not some 1,500 page bill overhauling the nationwide system in one fell swoop, but rather a gradual series of reforms and expansions that create space for building institutions and learning along the way. This could begin with particular geographies, particular industries, or particular terms and conditions of employment.

For instance, the minimum-wage fight strikes me as an ideal starting point. We already have wage boards in some states and minimum-wage laws are frequently set at the state and local levels. States could on their own build industry-specific processes, or the federal government could establish a framework for states to operate within.

Another opportunity, thinking sectorally, is the gig economy. Again, either states or the federal government could establish a process for selecting representatives of, say, drivers, and then mandate that anyone operating a platform come together to negotiate with those representatives. Low-wage service sectors where traditional unionization is non-existent could work, too. I’m particularly interested in your thoughts here, given the work you did in Seattle with the home-care industry. What were the biggest legal obstacles or gaps that you faced in that process, and what changes would best facilitate sector-wide representation and negotiation in such a context?

A third opportunity might be to introduce employment-law flexibility. If the federal government designated various regulations as optional defaults—in force unless a sectorally-bargained alternative were chosen—that might bring employers and workers to the table quickly. Certainly, basic provisions for nondiscrimination, etc. should be held aside. But when it comes to wages and hours, overtime, benefits, training, and so forth, why not let them have at it?

One more—either as a standalone mechanism or an enabler of the others—what about waivers from federal law that allow states to formulate their own alternatives? This is something R Street’s Eli Lehrer and SEIU’s Andy Stern have written about.

Does one or more of these approaches seem particularly appealing, or particularly unwise? Which legal frameworks, processes, or institutions do you see as most important to start with?

Even baby steps in any of these directions will require, and seems to offer potential for, political compromises. But those compromises will be far outside everyone’s comfort zone. Take the phrase “get rid of the minimum wage and use collective bargaining instead”; who hates, or loves, which parts of that? And what does each side envision as an alternative they might plausibly pursue instead? I’ll describe my impression of the general political dynamic, but I’m curious whether you perceive things differently.

Sectoral bargaining’s vast increase in worker power and the constraints it imposes on businesses seem like obvious progressive priorities. Conservatives can see benefits as well—in delivering better outcomes for workers, providing a governance mechanism that doesn’t rely on government edicts, and fostering strong community institutions—but they are rightly wary of two issues in particular: first, labor as a partisan political force that operates as an arm of the Democratic Party; second, public-sector unions as not only an especially potent political force, but also an immovable obstacle to good government. Legal reform that would strengthen these forces are non-starters for the right-of-center, both because substantively it seems likely to compound some of the biggest challenges in public policy today and because politically it would shift power to the opposition.

I think it’s important to emphasize here that the problem, in my mind anyway, is not that unions empower their members politically. That seems to me desirable, and something that people across the political spectrum should recognize as valuable regardless of who those members might be inclined to support. The problem is that today’s American unions don’t do that, instead they “launder” the resources of a heterogenous membership into homogenous support for Democrats.

This morning, for instance, Politico reported, “Labor leaders have worked for months to sell their members on Biden, hoping to avoid a repeat of 2016 when Donald Trump outperformed among union members and won the White House. … [U]nion leaders said they fear there’s nothing they can say to the Trump supporters among their ranks to sway their opinion between now and November.” So union leaders are not using union machinery to give voice to members’ political priorities, they are using the political weight of their members to give voice to the union machinery’s priorities. I see no prospect for a healthy labor movement so long as that continues.

Likewise, with respect to public-sector unions, the problem is not that public-sector employees have collective representation, it’s that the basic framework and rationales of private-sector labor-management relations do not apply when one party is the government as representative of the people. I’m sure labor leaders are tired of conservatives repeatedly citing Franklin Delano Roosevelt’s analysis on this point, but I’ll do it again, because it so clearly puts aside partisan assessments and offers a logical one:

Organizations of Government employees have a logical place in Government affairs.

The desire of Government employees for fair and adequate pay, reasonable hours of work, safe and suitable working conditions, development of opportunities for advancement, facilities for fair and impartial consideration and review of grievances, and other objectives of a proper employee relations policy, is basically no different from that of employees in private industry. Organization on their part to present their views on such matters is both natural and logical, but meticulous attention should be paid to the special relationships and obligations of public servants to the public itself and to the Government.

All Government employees should realize that the process of collective bargaining, as usually understood, cannot be transplanted into the public service. It has its distinct and insurmountable limitations when applied to public personnel management. The very nature and purposes of Government make it impossible for administrative officials to represent fully or to bind the employer in mutual discussions with Government employee organizations. The employer is the whole people, who speak by means of laws enacted by their representatives in Congress. Accordingly, administrative officials and employees alike are governed and guided, and in many instances restricted, by laws which establish policies, procedures, or rules in personnel matters.

I might add that, unlike in the private sector, government generally enjoys a monopoly on critical services, facing no market competition to constrain the parties in their bargains. All these problems are badly compounded by the aggressive involvement of public-sector unions in politicking for the government representatives who they will then bargain “against,” seeking to ensure the other side is in fact on their side, and to avoid policy reforms that might introduce any competitive pressure or other scrutiny.

A sectoral-bargaining regime could address these issues by explicitly separating the political and economic functions of unions responsible for sectoral bargaining, and by giving public-sector workers cooperative works-council-style representation without associated collective bargaining rights. Essentially, sectoral bargaining would be prevalent in the private sector, both public- and private-sector workplaces could make use of works councils, and both public- and private-sector workers could separately organize, and raise and spend money, for political purposes. I could see conservatives signing up for such an arrangement. Does it strike you as plausible?

Out with the Old?

A final question, both substantive and political, is what to do with the National Labor Relations Act and the existing labor framework. My inclination, at least in the short run, is to just leave it there, though with separation of the economic and political activities of a union as described above. If workers want to organize a workplace and bargain with the employer, so be it. Perhaps, as sectoral bargaining expands to cover a given group of workers, the option of enterprise-level bargaining would disappear and works councils would be permitted. I don’t see much to be gained from trying either to disassemble the NLRA preemptively or to buttress it anew.

One thing that has surprised me in recent conversations with progressives, though, is that they tend to see further strengthening of the existing enterprise-bargaining framework as a prerequisite to meaningful reform. In particular, I’ve been hearing a lot about the “PRO Act,” whose various provisions seek to make traditional organizing easier. I must admit, I’m perplexed by this—how is further entrenching the failed system that we are trying to move beyond a constructive step forward, let alone a must-have?

I suppose in some senses, my questions lie at both ends of a continuum: “what is the best grand-bargain future we can hope for?” and “what are the immediate, concrete steps we could take?” I think they are closely connected. Progress on the immediate and concrete will only happen if both sides feel it is in service to some larger improvement on the status quo. If either side sees initial movement as being in a direction worse than doing nothing, well then we will continue to get nothing.

I’m sure you can tidy up this mess. What concessions do you think progressives might consider to make a sectoral-bargaining regime palatable to conservatives, and what are the non-negotiable progressive priorities that conservatives will need to accommodate? And then where would you start? 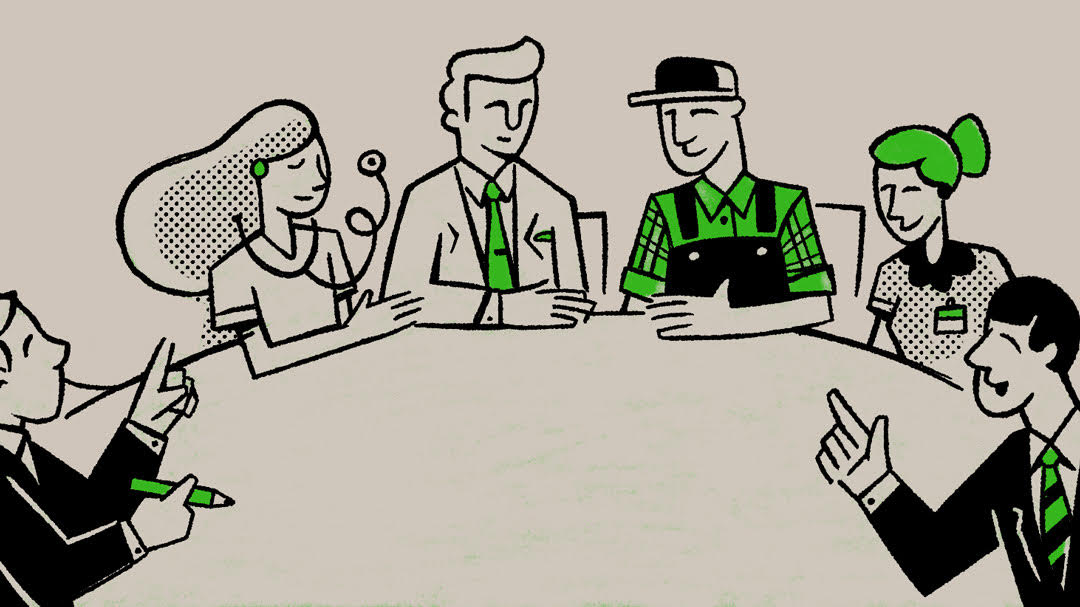 Economic and Political Bargaining Both Depend on Trust