A Trailer in the Country: Working-Class Attitudes about Redistribution 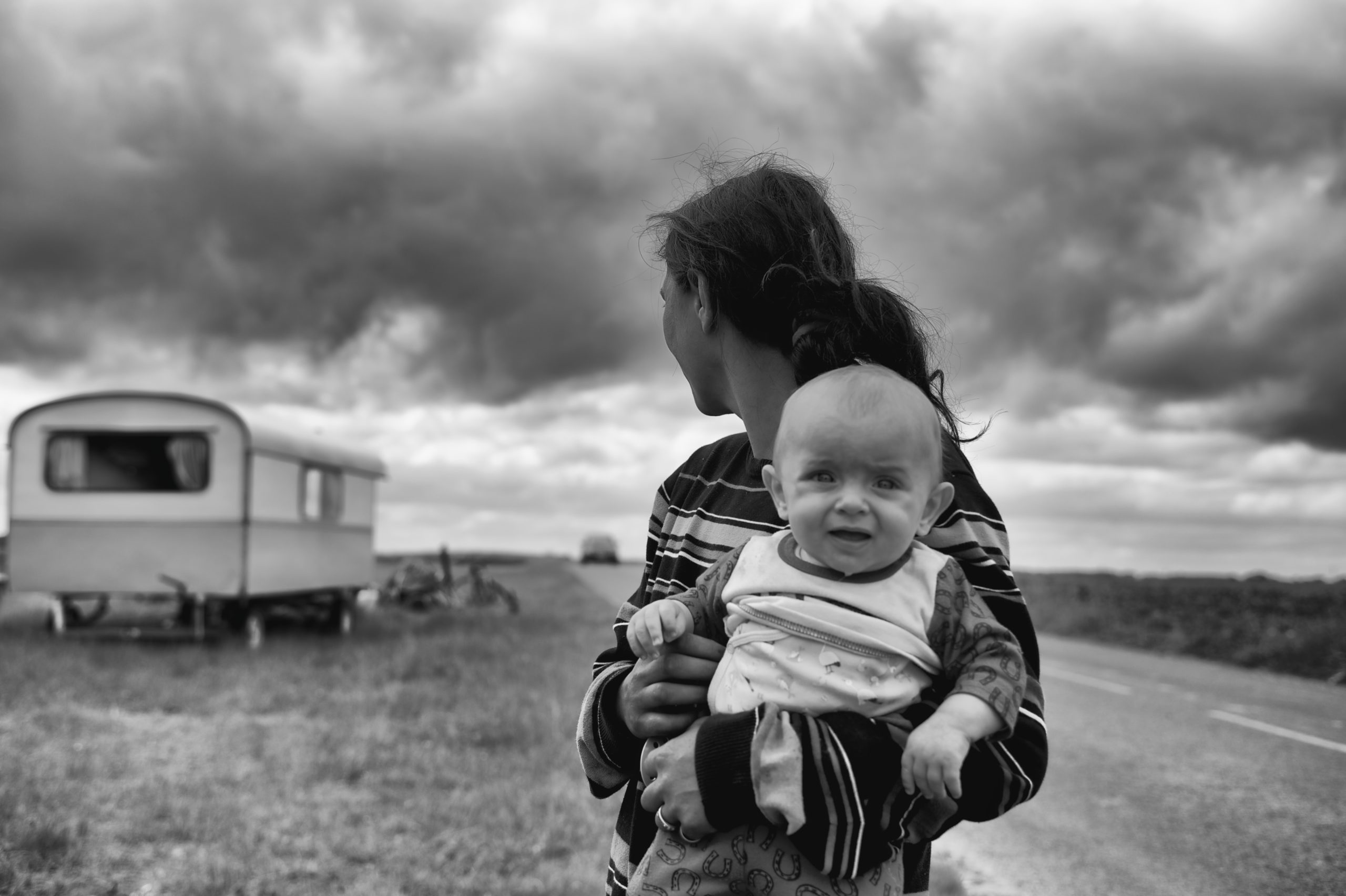 At the beginning of a lane of public housing units pink balloons mark the mailbox and a disposable tablecloth flutters in the wind, held down on a plastic table by a box of sprinkled cupcakes with high-topped icing and another box of assorted party favors. On the driveway a few people sit in more-or-less socially distanced lawn chairs and Ashley, the expectant mother, sits under a blue canopy receiving gifts from family and friends at her drive-by baby shower.

Ashley and her husband Seth married in January in a country-chic themed wedding. Though they currently live in a government-subsidized brick duplex in a small town in southwestern Ohio, the two of them would like to live on land of their own someday. Ashley says she doesn’t care if they live in a trailer, as long as it’s theirs. She regularly peruses Pinterest for ideas about building DIY tiny houses, and once considered rehabbing an old shed to make it livable.

“I just want something that is going to change our lives,” Ashley told me a few years ago, complaining of “drama” and drugs on their street. “I want to get out of our neighborhood.” It’s a common attitude among lower-income young adults who are eager for independence. As another young man from Ashley’s town said of his ideal, “If I could get a trailer out in the country with an acre lot, it’s fine with me.”

With Seth’s work hours at a recycling plant reduced due to the pandemic and Ashley’s impending due date—as well as upwards of $10,000 of student loan and credit card debt, four other kids between them both, and child-support payments—the couple has no illusions that they’ll be getting out of public housing anytime soon. Ashley’s most recent jobs have been in restaurant kitchens and as a school bus driver. She is currently out of work (during the pandemic she stayed home with her two school-aged children) but hopes to find a job after the baby is born.

In the meantime, they live out their back-to-the-land aspirations in little ways. Ashley shows me the landscaping they did themselves this spring—what used to be a plot of weeds is now a flower bed of marigolds, lettuce, and red mulch. Seth boasts of the standing vegetable and herb garden he built from old pallets he got at work. For now they are glad to have an affordable place to live, but they also stress that they don’t want to “live off the government” indefinitely.

Which brings me to the recent conversations here at The Commons between Oren Cass, Ed Dolan, and Samuel Hammond on conservatism and redistribution. Cass asserts that some on the right-of-center who maintain that the “non-negotiable starting point should be the free market and the pursuit of economic growth” and then advocate for a large safety net to pick up the pieces are necessitating “widespread government dependence, and the loss of a baseline expectation that people everywhere can become productive contributors to their communities and form stable families capable of self-reliance.” Dolan, Senior Fellow for Fiscal and Monetary Policy at the Niskanen Center, disputes this characterization.

“I think that Cass is wrong about the relationship between the safety net and government dependence, and wrong about how that relationship is viewed at Niskanen Center…. Cass is right that many of us at Niskanen advocate a larger social safety net, or, as we prefer to say when we are being careful, a stronger system of social insurance. In that regard, we are firmly in the classical liberal tradition of Friedrich Hayek, who ‘saw no reason why the state should not help to organize a comprehensive system of social insurance in providing for those common hazards of life against which few can make adequate provision.’ (Road to Serfdom.) But just what kind of social insurance? A kind that traps people in poverty or a kind that respects the ‘baseline expectation that people everywhere can become productive contributors to their communities?’ The answer, of course, is the latter.”

Over the past ten years of interviewing working class adults and then moving to a mostly working-class town, I’ve encountered very strong attitudes about redistribution—sometimes from people who feel that too much of their paycheck is going to programs to help people who aren’t working as hard as they should—but also from people who themselves benefit from government programs and yet feel trapped by them. During a 2016 focus group on work-family policy, one married mother of three who worked part-time at McDonald’s told me,

“I was working three days a week just to help bring in extra money to our house. But then we looked at the income guidelines [for public housing] and realized that we wouldn’t qualify. I was making too much, so I had to cut back my hours. I can only work one day a week. Which seems so backwards to me!”

A young father and factory worker agreed: “[Public] housing is completely wrong to me.” He lived with his girlfriend in subsidized housing and said that when you get a raise and rent subsequently goes up it’s hard to get out of the “hole.” He added, “And you just got that raise, you just got on your feet, and now they’re kicking you while you’re down.”

(In a recent commentary Dolan addresses the debate on the “poverty trap,” saying that despite some improvement “critical segments of the low-income population, especially those with incomes close to and just above the poverty line, continue to face weak work incentives.” He concludes that replacing current welfare programs with “a combination of universal income supports, universal child benefits, and wage subsidies for the lowest-paid workers” would be a better approach.)

Something I took away from that 2016 focus group is that despite handwringing about lack of work ethic today (and I’m not disputing that one can find examples), the strong desire to be “productive contributors” is still alive and well among young adults in working-class America. So strong in fact that I must confess that I sometimes find the attitudes I encounter to be uncomfortable—too harsh and unempathetic, too dismissive of the need for a social safety net, too worshipful of independence and dismissive of interdependence. As sociologist Jen Silva found while conducting interviews for her book Coming Up Short, there is a lot of self-blame among working-class young adults. Mark, a thirtysomething underemployed contract laborer who earlier in life had a large scholarship to The Ohio State University and has never forgiven himself for dropping out, told my husband in an interview, ““The only thing that’s holding me back is me…. I’ve gotta dig myself out of this hole I’ve got myself into. I’ve nobody to blame but myself. That’s the bottom line there.”

It’s noble to admit one’s faults and work to improve, but it’s all too easy for struggling young adults to veer from a simple attitude of “taking responsibility” to a self-hatred that tends to paralyze instead of mobilize and contributes to a culture of individualism opposed to solidarity. There is little organizing among the white working class adults I have interviewed, little will to political action, but much despair. It has been heart wrenching to see someone as intelligent and charismatic as Mark struggle with self-doubt and opioid addiction, particularly when so many of the personal challenges that burden him also have structural roots, both economic and cultural.

In my personal life I’ve also experienced the sometimes detrimental effects of the American emphasis on doing over being, the insinuation that dignity is primarily connected to usefulness, the meritocratic rat race Chris Arnade alludes to in his recent post on immigrants and the American Dream. Our culture does not always dignify the life of the person unable to work because of disability, or the person performing the unpaid work of caregiving.  It’s important that conservatives avoid the trap of stereotyping those who don’t “make it” in our economy.

And yet there is obvious good in the longings of people like Ashley and Seth, who want to experience the satisfaction of living off the fruit of their own labors, and therefore it is fitting that policies that redistribute resources do not work against the values of the people they are meant to serve. (In this case the value of self-sufficiency, though I’d argue that need not be conflated with bootstraps individualism.)

Given this, I like the criteria Dolan highlights from Cass, a guiding question that is a point of agreement between them: Is the policy at issue an improvement over what we have now? In order to know whether or not it is, essential data are the thoughts and experiences of poor and working class people, which can help to determine whether or not that policy takes people closer or further from the outcomes they hold most dear, whether that be a college education and upward economic mobility or a steady job and a trailer in the country.

Policymakers must be informed by the experiences of ordinary Americans—whether in focus groups, town halls, or creative new forums to make policymaking more transparent and accessible to the average citizen and reduce the distance people, particularly young people, perceive between themselves and politicians.

For surely a big part of inculcating a baseline expectation “that people everywhere can become productive contributors to their communities and form stable families capable of self-reliance” involves reviving the expectation that people everywhere become active participants in their government. This is particularly salient given that young adults like Ashley and Seth often feel the opposite: that their existence depends on the whims of a distant government over which they have no control and the seeming arbitrariness of income guidelines for government housing, food, and healthcare programs.

In this way, social insurance or redistribution (or whatever you call it) might be conceived as less of something imposed from on high by the powers that be, and more as a co-creative act of We the People. That’s the social solidarity we need.