“It’s my %$!#ing money” and the hollow populism of stimulus checks 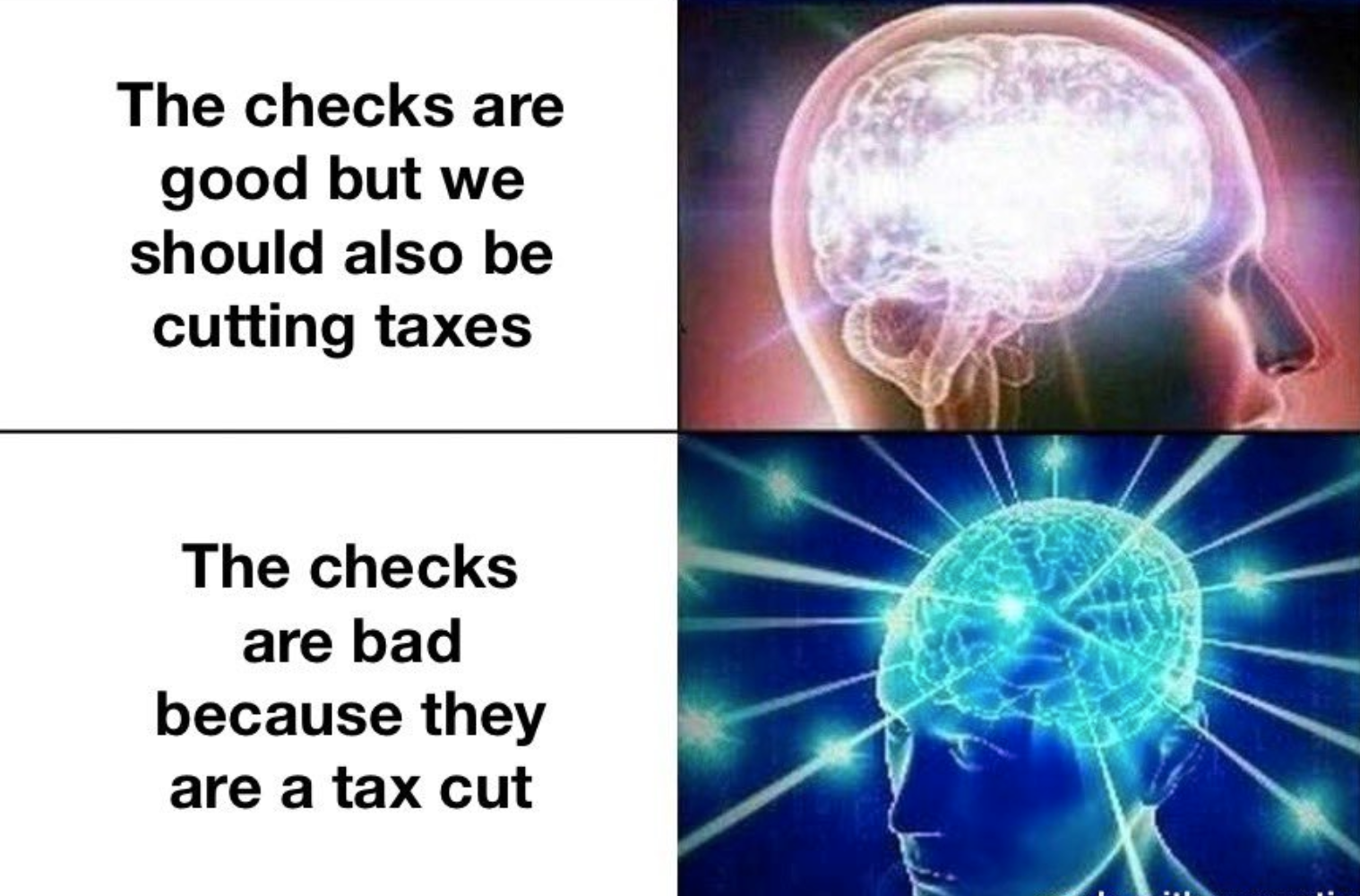 As the 116th session of Congress draws to a close, one question remains: where’s my $2000 stimulus check?

Trump supports it, and yesterday the House approved $2000 stimulus payments on a 275-134 vote, well exceeding the 2/3rds majority threshold required for passage. After an admirably transpartisan effort, the bill now heads to the Senate. Today, McConnell shot down consideration of the bill on the basis of unanimous consent, however that does not rule out it (eventually) garnering a vote.

Sure, I’m gainfully employed, in good health, and have little that I’m actually itching to buy. But that’s not the point. I deserve that $2000 as restitution for a universally stressful year, and I want it now! At least that’s the attitude of many in my Twitter feed. For example, after Jim Pethokoukis posed the fairly obvious question — “why should middle-class, even upper-middle-class, people with jobs be getting checks?” — one representative, albeit rude user responded, “Psst. It’s my f**king money.” If anything, that was polite compared to the vitriol hurled at economist Larry Summers for raising similar points days earlier.

That attitude, “It’s my %$!#ing money,” nicely encapsulates my own growing ambivalence for stimulus checks: in lieu of a clear case for additional, indiscriminate fiscal stimulus, the groundswell of popular support for ever-bigger checks strikes me as Tea Party-style tax cut populism, just with better distributional tables. Of course, the distributional tables matter. Better to helicopter-drop $2000 on poor and working-class families than to hope an equivalent tax cut for their corporate overlords somehow trickles its way down. As such, if I was a sitting Senator I’d likely vote for bigger checks despite these misgivings. Nevertheless, at the level of agenda-setting, one-off stimulus checks would not have been my first priority — and I say that as an advocate for direct payments in the CARES Act and as a fan of cash transfers more generally.

“For the last 7+ months I’ve been saying that the Left should claim, highlight, and center the fight over extending the massive expansion of UI, not just as an important program but as a model for reinvigorating Social Security. My read is that this didn’t happen. Why is that?”

One simple explanation is that stimulus checks stole the limelight. Direct payments were immensely popular, while most state Unemployment Insurance systems struggled to process the influx of claims thanks to antiquated technology. That’s too bad, because to my mind those technical failures were all the more reason to double-down on UI. Crashing websites and line-ups around the block were symbolic of our dwindling state capacity and wide-ranging institutional decay. The glitches with UI thus underscored the need to modernize a piece of social technology that, whatever its flaws, remains the most responsive part of the safety-net for dislocated workers by far.

“Checks,” in contrast, risks becoming the rallying cry for a hollow form of populism, one that seeks to merely extract value for the masses rather than build something new and permanent. Andrew Yang’s “Freedom Dividend” springs to mind for its literal conflation of social protection with a profit distribution, as if the U.S. government were so short of collective problems to solve that it was prepared to buy-back its shares. On closer inspection, this is just a bleeding-heart version of the Grover Norquistian view (implicit throughout the stimulus discourse) that the best use for a marginal federal dollar is to return it to the taxpayer — an essentially reactionary idea that, for better or worse, appears to be gaining steam on the left.